11:02 2021
Print This Article
👤by India
Filed under
Market Outlook

The financial year 2020-21 was the best of the decade barring volatility in the last month. The new financial year, too, is off to a strong start, with the Nifty50 rallying more than a percent in the first week of April even as the second coronavirus wave has hit India hard.

Data shows that the bulls have ruled the Nifty in April in seven of the last 10 years. April 2020 was the best, with the Nifty rising rose more than 19 percent. It rose over 6 percent in April 2018 and 4 percent in 2013.

Momentum is expected to continue this April as well despite a surge in coronavirus cases that has brought back some restrictions in Maharashtra, Delhi and other parts of the country, raising concerns about growth, experts say.

“Yes, the seasonality index of the Nifty depicts that 20 years, 10 years and 5 years average of April months has been great for the bulls. With a mediocre performance in March 2021. even we expect the markets to head north, unless 14,000 remains intact for the Nifty,” Mehul Kothari, AVP – Technical Research at AnandRathi told Moneycontrol.

Volatility is expected to remain high in the near term. Short-term investors and traders may turn cautious on the equity market but the bulls will probably dig in as India is better prepared to deal with COVID cases with the availability of vaccines and strong buying near crucial support levels, say experts.

“Apart from investors more importantly the markets have been good for traders, wherein bulls and bears are getting opportunities. However, the bigger trend remains bullish and likely to remain as it is in April too,” Kothari said. 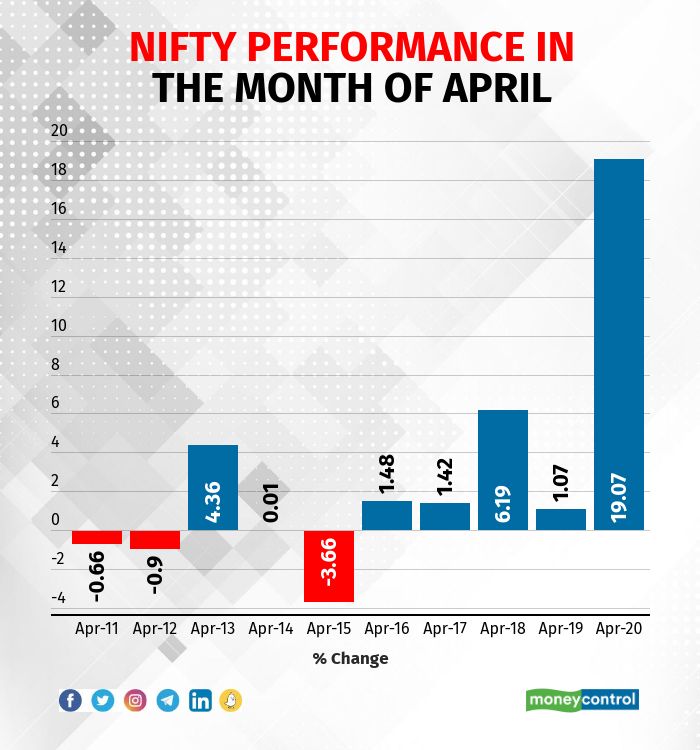 From a technical perspective, the Nifty50 is trading near the 50-day moving average—placed at 14,786 on daily charts—which acted as a still resistance for the index in the recent past.

Analysts do not rule out volatility amid a rise in COVID cases, night curfews and other restrictions that have been put in place in various parts of India, which can hurt sentiment and dent growth.

The economic impact of the lockdown in Maharashtra could dent up to 0.3 of growth, according to estimates from CARE Ratings. The Nomura India Business Resumption Index (NIBRI) dropped sharply to 90.7 for the week ending 4 April from 94.6 in the previous week, ~9.3pp below the pre-pandemic normal.

This is its steepest weekly decline since mid-April 2020. The fall was driven by a sharp deterioration in mobility data, while the impact on real activity indicators appears less severe, said the Nomura report.

Delhi has now joined Maharashtra in imposing night curfew till month-end. Reports of workers once again returning home from these and other industrial cities is trigerring worries for the nascent recovery.

“The primary risk of Covid has re-surfaced again, which will prompt the RBI to keep an accommodative stance in the April meet and ensure any premature withdrawal of liquidity doesn’t send a wrong message to the market,” Nischal Maheshwari, CEO–Institutional Equities, Centrum Broking told Moneycontrol.

Trend of foreign institutional investors (FIIs) will also be watched as they turned net sellers in the last week of March, pulling out more than Rs 700 crore from the cash segment of Indian equity markets.

The Nifty slipped more than 4 percent from its monthly high of 15,336.30 levels but the monthly chart is still showing good strength and a positive trend for the upcoming months.

“Technically, the Nifty has an immediate resistance at around 14,900 levels. Above those levels, the Nifty may rally further towards the level of 15,300 on an immediate basis and if the price sustains above that, it will open a new range for nifty till 15500/15800 levels in the next couple of months,” Sumeet Bagadia, Executive Director at Choice Broking told Moneycontrol.

“At present, the investor may consider this fall as buy opportunity and do accumulate the stocks at every dips for the better return in the longer term,” he said.

After a strong third quarter, all eyes will be on the fourth quarter results. More than the results, the management commentary of India Inc for the new financial year will be closely watched .

“Volatility is likely to continue in the month of April as the Nifty 50 continues to consolidate in a range of 14,260-14,880. Any break from the immediate range can dictate the Nifty’s course in April. However, we do maintain a mildly bullish outcome, given the approaching result season,” Nirali Shah, Head of Equity Research, Samco Securities told Moneycontrol.

The month of April also signifies the start of a new financial year. Well, nothing has changed but investors have to pare down their expectations for FY22.

Benchmark indices rallied by about 70 percent in FY21, which was largely on a low base, hence experts advise investors to lower their expectations from the new financial year, which could see more normalised returns.

“The stellar returns of 71 percent in FY21 were on a lower base of valuations, steep correction in the last quarter of FY20 on account of global sell-off with respect to the COVID crisis,” Vikas Jain, Senior Research Analyst, Reliance Securities told Moneycontrol.

“The Nifty50 is trading 12 per cent higher than the 10-year average on one-year forward PE, so we do not expect a similar performance in FY22. We could expect some consolidation at current levels and as earnings increase and roll over to the next year. We could see the Nifty50 test 16,300 levels by December 2021.”

Kothari of AnandRathi told Moneycontrol that in case of a major negative trigger, 13,000 should act as strong support for the coming few months.

Solara Active: Aurore deal to act as a booster for CRAMS; accumulate

Questor: we’ve made an 11pc loss on GlaxoSmithKline. Here’s why we’re sticking with it

The Moneyist: My husband signed for a car for a friend — against my wishes. Now we get notices for unpaid tolls and parking tickets. What if there’s an accident?