With over 30 initial public offerings (IPOs) raising Rs 39,000 crore in FY21, amid evidence of ample liquidity, the primary market is expected to remain active in the ongoing financial year (FY) 2021-22 as well.

The first quarter (April-June) of FY22 is likely to see at least 10-15 public offers, of which five or six could be in the month of April.

Real estate company Macrotech Developers, formerly known as Lodha Developers, will kick off the IPO season this year when their Rs 2,500-crore public issue will open for subscription on April 7 and will close on April 9.

If the above list comes as expected, then the total size of the IPOs could be around Rs 18,000 crore in April itself. Corporates raised around Rs 18,800 crore in first quarter of 2021. 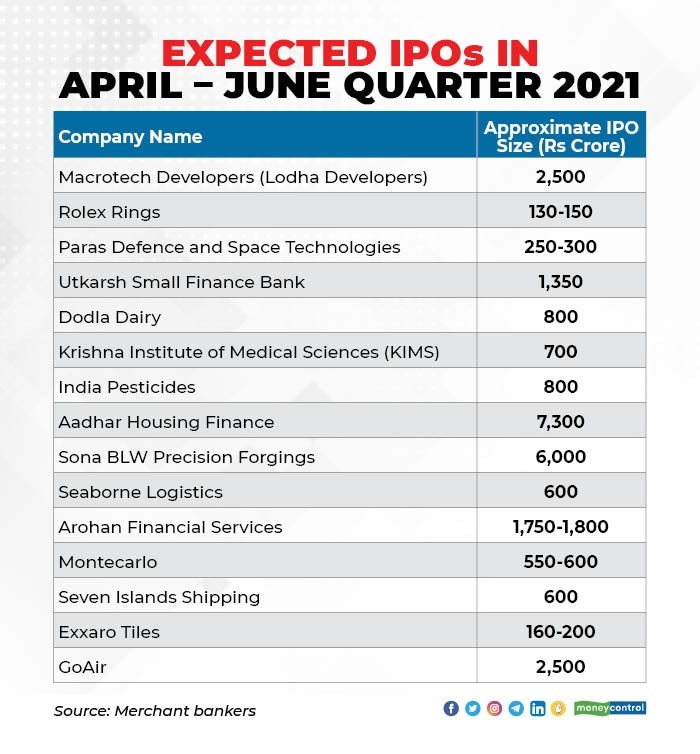 The primary reason for the large number of IPOs in FY22 could be the expected uptrend in the secondary market, including midcaps and small caps, where the maximum action could be seen, predict experts.

“We believe that the Indian stock market rally will continue its movement in 2021 and the primary market will mirror the same story. With ongoing enthusiasm in primary markets and participation in all the categories, new IPOs are rushing in,” Prashanth Tapse, AVP Research at Mehta Group told Moneycontrol.

The total fund raising through these IPOs could touch the Rs 26,000-crore mark in the June quarter of FY22. 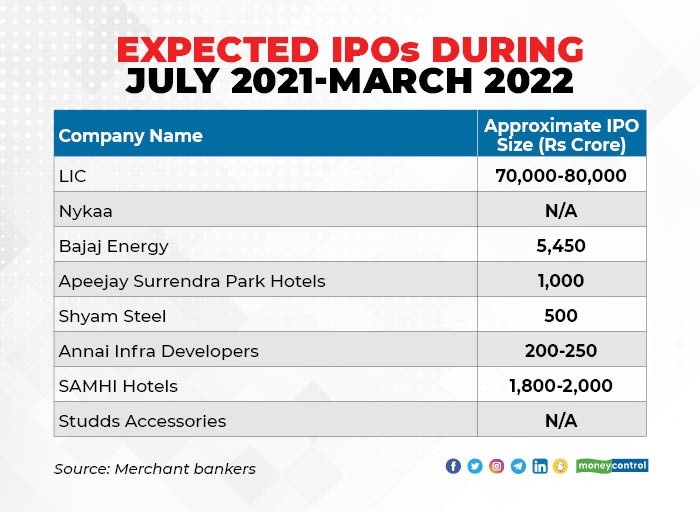 The year is also special because LIC’s IPO, the largest state-owned life insurance company, is expected in the FY22. Finance Minister Nirmala Sitharaman has promised to launch this IPO in FY22.

Gaurav Garg, Head of Research at CapitalVia Global Research told Moneycontrol: “Finance Minister Nirmala Sitharaman, declared in the Union Budget 2021 that the LIC IPO is estimated to be completed in 2021. The scale of the issue is estimated to be between Rs 70,000 to Rs 80,000 crore. It has also been stated that policyholders will receive 10 percent of the issue size.”

Nykaa, Bajaj Energy, Apeejay Surrendra Park Hotels, Shyam Steel, Annai Infra Developers, SAMHI Hotels and Studds Accessories could be other IPOs that may be launched in the July 2020-March 2021 period.

“This IPO frenzy may continue in the short term, as almost all IPOs are listings with big gains for short term investors. However, from here-on, only IPOs with robust business models in growing sectors can sustain such massive valuations,” Amit Jain, Co-Founder and CEO at Ashika Wealth Advisors, told Moneycontrol.

He added: “In my view, the government is committed to the LIC IPO in this FY22. However, for two PSU banks, it may wait more for an appropriate time to get a fair valuation.”