Just a week ago Goldman Sachs increased its forecasted U.S. GDP growth rate for calendar 2021 to 8%, and since then the total U.S. stock market has declined by 1%. That seems counterintuitive, but it shouldn’t be surprising.

That’s the conclusion I reached upon analyzing the stock market and economic performances of 17 developed markets back to the 1870s. What I found is plotted in the chart below; notice the absence of a positive relationship between the growth rates of real per-capita GDP and the stock market’s real- and inflation-adjusted return. (I based my analysis on data described in a 2019 study in the Quarterly Journal of Economics entitled “The Rate of Return on Everything, 1870 to 2015.”) 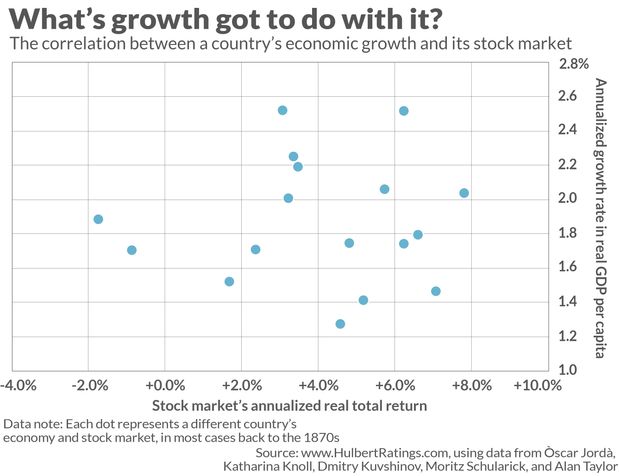 One way of quantifying this pattern is to look at the correlation coefficient. In the chart, it would be 1.0 if a country’s growth rate of per-capita real GDP were perfectly correlated with the real total return growth rate of its stock market — and minus 1.0 if the correlation were perfectly inverse. The coefficient would be zero if there is no detectable relationship one way or the other.

For the data in the accompanying chart the correlation coefficient is 0.02, which is insignificantly different from zero.

Others have pointed out the low explanatory power of a country’s economic growth for stock investors. For example, Jay Ritter, a finance professor at the University of Florida, calculated that the correlation coefficient for 16 countries between 1900 and 2002 was minus 0.37.

Joachim Klement, an investment strategist at London’s Liberum Capital and a trustee of the CFA Institute Research Foundation, found a similar result when expanding the focus to 22 developed- and 22 emerging nations. Reporting his results in the Journal of Investing, Klement found “no evidence of a positive correlation between stock market returns and real gross domestic product (GDP) per capita growth in any of these cases.”

Why would a country’s economy have so little ability to explain the performance of its stock market? The factor that has by far the biggest explanatory power, according to a study that appeared in 2018 in the Financial Analysts Journal, is whether a country’s stock market has suffered from dilution (more shares issued than repurchased) or accretion (more repurchases than issuance). “Net buybacks explain more than 80% of the cross-sectional dispersion of [countries’] stock market returns,” the study’s authors write.

To be sure, net buybacks aren’t a short-term market timing tool. So this research result doesn’t enable us to predict how the stock market will perform over the next few weeks or months. I would nevertheless note that, so far this year, more shares of U.S. publicly-traded companies have been issued than repurchased—which means net buybacks are negative and are therefore having a dilutive (bearish) effect on the U.S. stock market.

The more important lesson to take from this research is that we shouldn’t be surprised that the stock market hasn’t immediately jumped higher in response to upward revisions of forecasted economic growth.

Plus: Want to understand the future of cryptos and NFTs? Register for MarketWatch’s free live event: https://events.marketwatch.com/crypto/home

: Airbnb is doing better than it was before the pandemic, and the stock is gaining

The Margin: Dolly Parton gets first shot of COVID-19 vaccine she helped fund