The Nifty50 bounced back sharply from the previous day’s selloff and closed with a percent gains on April 1 on US President Joe Biden’s $ 2.3-trillion spending plan, strong buying in metal stocks and a recovery in the banking sector.

The Nifty rebounded sharply at the opening at 14,798.40 and erased some gains in the morning itself to hit the day’s low of 14,692.45 but did not break the previous day’s closing.

The index rebounded immediately and gradually extended gains to touch an intraday high of 14,883.20. Overall it remained in the positive terrain for the entire session and closed at 14,867.40, up 176.70 points, or 1.20 percent.

It formed a bullish candle, which resembled the Hanging Man pattern on the daily charts, while on the weekly scale, there was a small bullish candle formation. The Nifty gained 2.5 percent during the truncated week.

A Hanging Man is a bearish reversal candlestick pattern that is usually formed at the end of an uptrend or at the top. In a perfect ‘Hanging Man’ pattern, there is a small upper shadow or no upper shadow at all, a small body and a long lower shadow.

As weekly and daily MACD, along with other technical parameters, are still in sell mode, traders should initiate long positions only if the Nifty sustains above 14,900 for at least 30 minutes and look for a modest target placed at around 15,120, Mazhar Mohammad, Chief Strategist–Technical Research & Trading Advisory at Chartviewindia told Moneycontrol.

The market will remain shut on April 2 for Good Friday.

The Nifty made a strong recovery from the intraday low of 14,692 and formed a Hanging Man pattern and a small bullish candle on weekly charts. As the trend seems to be sideways, this indecisive formation may not have the same pattern implication as it can be seen in a trending move, Mohammad said.

In sideways phases, price action often criss-crosses the moving average, reducing its reliability and hence, a close above the 20-day average itself shall not be significant, he said.

At this juncture, 14,900 looks to be significant resistance in the near term. If the index closes above it, then it can induce some strength in the index which can expand the upswing into 15,100–15,170 zone, he said.

In between, the Nifty needs to sustain above 14,690 as a breach on a closing basis can induce weakness in the near term, Mohammad said.

The Bank Nifty opened positive at 33,588 and moved in a range in the first half of the session, which was followed by a swift recovery in the latter part. It closed the session 554.10 points higher at 33,858, signalling the return of the bulls.

The index formed a bullish candle on the daily scale, with long lower shadows and an inside bar on the weekly frame. “The Bank Nifty has to continue to hold above 33,500 levels to witness an upmove towards 34,500 and 35,000, while on the downside, support is seen at 33,333 and 33,000 levels,” Chandan Taparia, Vice President | Retail-Research at Motilal Oswal Financial Services said. 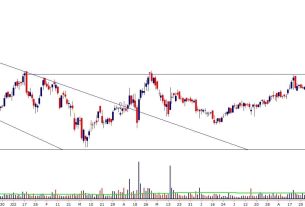 Trade Spotlight | What should you do with IDFC, JBM Auto, Triveni Turbine on Thursday?