This year’s spring home-buying season is set to be one of the most competitive ever, as the pandemic continues to stoke interest in homeownership. And home prices are skyrocketing as a result.

A new report from real-estate brokerage Redfin RDFN, -1.31% found that 39% of homes sold above their listing price during the four-week period ending March 21, an all-time high. That figure is 15 percentage points higher than during the same stretch of time a year ago.

The median home-sale price was $ 331,590, Redfin reported, which represented a 16% increase from a year ago. Researchers noted, though, that the year-over-year comparisons may be skewed by the fact that around a year ago, states were beginning to issue stay-at-home orders as COVID-19 cases ballooned, and those orders caused a temporary halt in real-estate activity.

Nevertheless, the rise in home prices is clear. And at a time when mortgage rates are also soaring, it’s creating a much more challenging environment for first-time buyers. 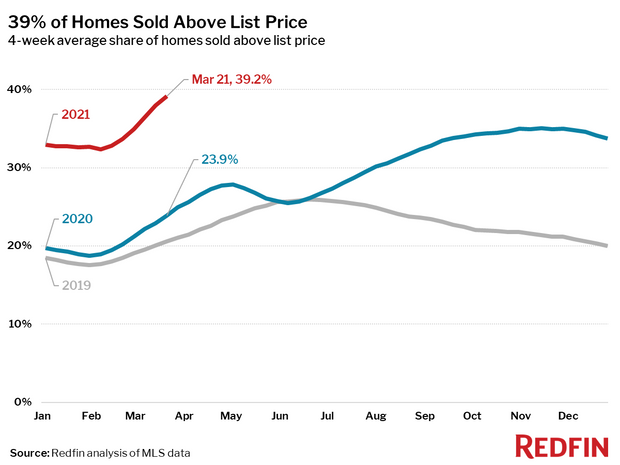 “It’s concerning how much home prices have risen during the pandemic,” Redfin chief economist Daryl Fairweather said in the report. “When the pandemic is over, purchasing a home is going to cost much more than ever before, putting homeownership much further out of reach for many Americans.”

Redfin’s research echoed the findings of other real-estate economists. A recent report from Realtor.com found that the total inventory of active home listings was down 52% from a year ago. And research from Zillow ZG, +1.23% Z, +2.95% indicates that home values have risen in every one of the 50 largest metropolitan areas nationwide.

Sellers remain hesitant to put their homes on the market — either because of the pandemic or out of fears of not having a home to move to following a sale. And new-home construction, while elevated, can’t make up for the lack of existing homes for sale.

As a result, the properties that do make it to the market are scooped up in a heartbeat. According to Redfin, 58% of homes under contracted had accepted an offer within two weeks of being on the market, and 45% accepted an offer after just one week. Both figures represented all-time highs since the brokerage began tracking this data.

The competition in the real-estate market now underscores the need to build more homes, Fairweather argued. “America needs an audacious goal to increase the housing supply, given the U.S. is short 2.5 million homes,” she said. “It may be expensive to build millions of homes, but ignoring the problem would only cause housing to become more unaffordable and worsen housing insecurity.”

: ‘We will see a war over the next couple months between Robinhood enthusiasts and Robinhood skeptics’

IPO Report: Zevia IPO: 5 things to know about the zero-calorie beverage company before it goes public