This article is reprinted by permission from NextAvenue.org.

As someone whose family had a painful experience with conservatorship, I was especially interested in watching the two recent films dealing with the subject. Now, having seen the comedy-thriller “I Care a Lot” and the documentary “Framing Britney Spears,” I can say that there are truths to be told in both of them.

In “I Care a Lot,” Marla Grayson, the diabolical conservator played by Rosamund Pike — who just won a Golden Globe for her performance — puts things well when she says: “There are two types of people in this world, the people who take and those that were took — predators and prey.”

Of course, not every conservator (a person appointed by a court to manage the finances, and sometimes the life, of a person deemed unable to do so) is a predator. And not every person who has a conservator — sometimes called a guardian — is prey.

“ Britney Spears is a cash cow — if she’s singing and dancing on stage — but she’s currently refusing to perform until her father steps down as her conservator. ”

But of the roughly 1.3 million adult guardianship or conservatorship cases in the U.S., controlling at least $ 50 billion in assets, some are handled by people who are certainly abusive, if not doing things that are illegal. This reality allows the most vulnerable population to be taken advantage of by greedy predators.

See: ‘A criminal sociopath:’ Judge-appointed conservator drained my mom’s estate and kept us from her

I confess I was reluctant to watch the Netflix NFLX, +2.13% film “I Care A Lot” because I knew it would resonate with what happened to my own mother while under a probate conservatorship.

In it, Grayson runs a lucrative business as a court-appointed guardian for older adults. One of her victims, Jennifer Peterson (played by Dianne Wiest), loses all control over her life when the court determines she is no longer able to care for herself or handle her finances and that Grayson will take over.

The ‘I Care a Lot’ conservatorship comedy-thriller

It is virtually impossible for a conservator to pull off such a corruptive scam alone, though. Doctors and members of the court are sometimes complicit, either knowingly or otherwise, as the film shows. In “I Care a Lot,” a nursing home also plays a role in the layered network of conservatorship corruption.

When the film begins, Grayson needs a doctor’s clinical diagnosis of dementia for someone to become their conservator. Her friend, Dr. Amos (Alicia Witt), says she has the perfect candidate in Peterson, who Amos calls a “cherry.”

That’s code for an easy target. “She has no kids, no husband, no living family. She has very good insurance,” Amos says of Peterson.

But Amos wants payment from Grayson for the phony diagnosis. She says: “I can’t just give you a cherry for free. I need something in return. You hold stock…sign some over to me. I’m helping you feed the money monster…Give me a taste.” Grayson agrees.

I’m familiar with these so-called “doctor’s notes” used as weaponry in court to give someone a diagnosis to get them conserved. A few years ago, while working as a family advocate, I heard of a case where the Public Guardians office believed the conservator had a doctor commit perjury in court to get hold of a woman’s estate and take control of her life.

In conservatorship cases, legal records are often sealed and there’s no standardized public record-keeping procedure. So, the judicial system becomes the perfect playground for predators. Once the court approves a conservator, it opens the door for a corrupt trickle-down effect.

My mother’s conservator removed all the belongings from her house and then did unnecessary renovations to sell it and further line his pockets. When my mother objected, she was told that if she didn’t go along, she’d end up in a nursing home. If I had tried to present that conversation in court, it would have been considered hearsay. In addition, she had already been deemed “incompetent” by the court; my mother’s word wouldn’t have mattered.

Although my mom was never sent to a nursing home, she had in-home caregivers. They were paid a minimum wage, yet my mother was billed upward of $ 30,000 a month for their services, due the conservator’s invoicing.

In “I Care A Lot,” the judge isn’t presented as a predator, but as someone easily manipulated by Grayson. He has come to trust and endorse her efforts since Grayson is a successful, long-term member of the conservatorship process.

I had zero success protesting the choice of my mom’s conservator with a judge who had been working with that man for years. I was only able to successfully remove him when the judge retired.

In 2008, Spears was placed under a court-mandated probate conservatorship. It’s been making medical and financial decisions for her for the last 13 years. Spears’ conservatorship lets her father Jamie Spears (and a financial company) manage his daughter’s financial and medical affairs, leaving her with no legal control over her estimated $ 56 million estate or assets.

Spears is a cash cow — if she’s singing and dancing on stage — but she’s currently refusing to perform until her father steps down as her conservator. She and her dad have what’s been called a “fractured relationship.” 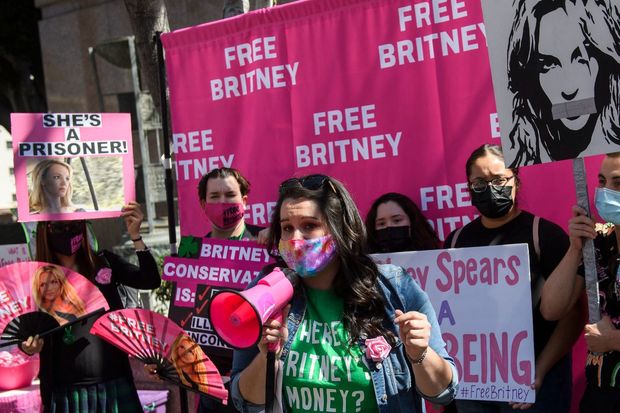 Supporters of the FreeBritney movement rally in support of Britney Spears following a conservatorship court hearing in Los Angeles on March 17, 2021.

The film shows Spears’ initial attorney Adam Streisand, explaining that he’d been made aware she didn’t want her father to be her conservator. Streisand went to court and was informed by the judge that he had a medical report he wouldn’t show Streisand, stating that Spears was incapable of retaining or directing a lawyer on her own.

Streisand had previously met with Spears and thought she was both competent and capable of making decisions on her own. But the medical report kept Spears from retaining his services.

Not all court-appointed counsels are corrupt, of course. But since they play an instrumental role in these proceedings, they can sometimes be near the top of the totem pole of disaster.

I was only able to successfully request a new court-appointed counsel once I got in front of a new judge after the initial judge retired.

Also read: The problems of today’s nursing homes can be traced back hundreds of years: How they evolved into what they are today

And that’s not just Hollywood talking.

Erica Loberg is a poet and author. Her new book of poetry, “I’m Not Playing,” is based on her experience with her mother’s conservatorship. Her book “Inside the Insane” is a memoir about her struggles with Bipolar II coupled with a look at inpatient psych wards in Los Angeles County. She can be reached at ericaloberg@gmail.com.

This article is reprinted by permission from NextAvenue.org, © 2021 Twin Cities Public Television, Inc. All rights reserved.

More from Next Avenue:

Outside the Box: The growth gap is widening at the expense of states with lower vaccination rates

: Want to own Twitter’s kitchen equipment or office chairs? Here’s your chance

Earnings Watch: The pandemic’s differing earnings effects will be on display with tech, airline reports