The Nifty50 gained strength in the afternoon and closed higher for the first time after five sessions on March 19, forming a bullish candle that resembled a Piercing Line pattern on the daily charts. FMCG, IT, metals, pharma and select banking and financials lent support to the index.

The piercing pattern is a bullish trend reversal or bottom reversal pattern that appears towards the end of a downtrend. It opened with a gap down and went on to close above the midpoint of the preceding session. It is an early sign that the bulls are in charge and decline is being bought.

The Nifty50 fell 1.9 percent during the week and formed a bearish candle that resembled a hammer formation on the weekly scale.

The hammer is a bullish reversal pattern formed after a decline. A hammer consists of no upper shadow, a small body, and a long lower shadow. The long lower shadow signifies the stock tested its support, where demand was located and then bounced back.

“Interestingly the said low is also inside the bullish gap zone registered on February 2. Hence, next week if Nifty consistently trades above 14,475 levels then the probability of bottoming out at today’s low of 14,350 shall remain higher. Though a proper confirmation in this regard can be expected only on a close above 15,051 levels,” he said.

Despite this strong recovery, the last six weeks of sideways price action on the weekly charts appears to have paved the way for a sell signal on the weekly MACD chart. Hence, the sustainability of this rally shall remain somewhat uncertain, Mohammad said.

India VIX was marginally down by 0.46 percent from 20.08 to 19.98 levels. “Lower VIX with rising Put Call Ratio indicates that bulls may get some stability after the losing ground of last few sessions,” said Chandan Taparia of Motilal Oswal.

The index formed a bullish candle on the daily scale after a series of weak sessions. “And now the index has to negate the formation of lower highs of the last five trading sessions to attract short-covering move. It needs to hold above 34,250 to witness a bounce towards 35,000 levels, while on the downside support is seen at 33,500 and 33,333 levels,” Chandan Taparia, Vice President | Retail-Research at Motilal Oswal Financial Services said.

The Bank Nifty fell 3.8 percent during the week and formed a bearish candle on the weekly charts.

Trade Spotlight | What should you do with JK Cement, Crompton Greaves Consumer Electrical, Voltas on Friday? 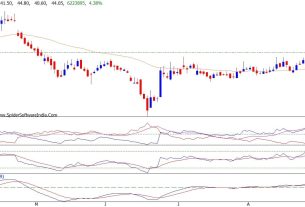 Trade Spotlight | What should you do with JSW Energy, Force Motors, Paras Defence on Thursday?