The Nifty50 wiped out gains in afternoon trade and closed moderately lower on March 16, forming a small bearish candle on the daily charts. The rising coronavirus infections, higher oil prices and FIIs as well as DIIs outflow dented sentiment.

The bearish candle gets formed when the closing is lower than opening levels. Experts expect the selling pressure to extend if the index fails to come back above the crucial 15,000-mark in the coming sessions.

Mazhar Mohammad of Chartviewindia advise intraday traders to create short positions below 14,890 levels and look for a modest target of 14,750 levels.

“Nifty50 remained listless as it traded in a narrow range of 160 points before signing off the session with a small bearish candle. However, in this process it seems to have broken down below the 20-day exponential moving average (14,955) which was offering some cushion to this counter on the downside,” Mazhar Mohammad, Chief Strategist – Technical Research & Trading Advisory at Chartviewindia told Moneycontrol.

According to him, in next one or two trading sessions, if the bulls fail to push the index beyond 15,000 levels on closing basis then the trajectory of this market shall remain in the southern direction with initial targets being the test of 50-day simple moving average whose value is placed around 14,720 levels.

Contrary to this, trading bias can change sideways to positive provided bulls manage a sustainable close above 15,000 levels, he said.

India VIX declined by 4.90 percent from 21.22 to 20.19 levels. A fall in VIX below 20 levels is required for bullish grip and smoother move in the market, Chandan Taparia of Motilal Oswal Financial Services (MOFSL) feels.

Bank Nifty opened positive at 35,352 but has been moving southwards since its opening levels. Even though it respected its immediate support levels and did not breach yesterday’s low, a clear trend needs to emerge, experts feel.

The index underperformed the Nifty index and settled the day with losses of 377.95 points or 1.07 percent at 34,804.60, forming a bearish candle on daily scale with negligible shadows.

Trade Spotlight | What should you do with Jubilant Ingrevia, Bank of India, Mrs Bectors Food Specialities on Thursday? 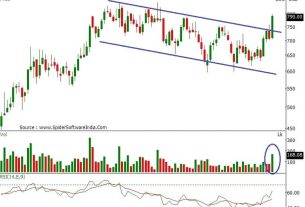 Trade Spotlight | What should you do with Bharat Forge, Zomato, Newgen Software Technologies on Tuesday? 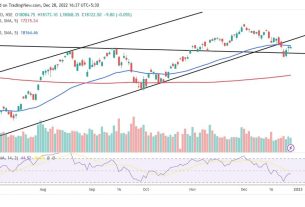