The marijuana business is rightly described as a fledging industry. But what investors see as a potential promised land may be further off than many expect because full federal legalization may take a long time.

The unfolding legalization of marijuana in U.S. states makes this a complicated and potentially lucrative space for investors. Most marijuana ETFs are passively managed, meaning they track indexes.

The following discussion points to an advantage for active managers of exchange traded funds who can tailor strategies as the legal landscape changes.

Meanwhile, investors had better rethink their focus on Canadian cannabis companies, some of which may be cut out of a big piece of the industry action. The devil is in the details. 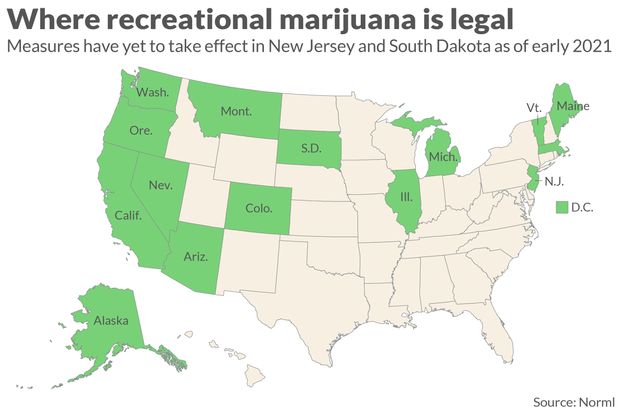 Marijuana has been legalized for recreational use in 15 U.S. states and Washington, D.C. However, it remains illegal on the federal level. This has led to a bizarre scenario.

The Canadian licensed producers (known as LPs) do not sell cannabis products in the U.S. because it is against U.S. law. But shares of the largest five are listed on the Nasdaq exchange or the New York Stock Exchange:

Don’t miss: To profit from planned merger of Tilray and Aphria, buy Aphria, says this analyst

Meanwhile, the four largest U.S. companies selling marijuana products in states (and Washington D.C.) where recreational use is legal aren’t listed on U.S. exchanges because they are engaged in activities that are technically illegal on the federal level. They are listed over the counter. These companies are known as multistate operators (MSOs):

In an August 2013 memorandum to U.S. attorneys, now known as the “Cole Memo,” James Cole, the deputy attorney general at that time, defined the Department of Justice’s position as relying on states that had legalized marijuana for recreational use to set up regulatory schemes to ensure compliance with eight DOJ goals listed on the first and second page of the document.

Since then, the federal government hasn’t attempted to arrest people within those states for purchasing small amounts of marijuana to use recreationally.

But under the Investment Company Act of 1940, mutual funds and exchange traded funds are still not allowed to own shares of the MSOs.

Dan Ahrens, the portfolio manager for YOLO and MSOS, said during an interview Feb. 12 that he doesn’t expect the Canadian LPs to be able to sell marijuana in the U.S. for the “foreseeable future” because “neither the Democratic-controlled Congress nor President Biden ever called for full federal legalization of marijuana.”

This is where the arguments begin.

It’s easy for a politician to say he or she wants marijuana “decriminalized” for leisure use in small amounts. But that is not full legalization, which in addition to allowing leisure use of marijuana anywhere in the U.S., would allow banks to provide full services to U.S. marijuana producers and distributors, and allow their shares to be listed on public exchanges.

Full legalization would also presumably open up the U.S. market to the Canadian LPs.

So Ahrens expects state-by-state legalization to continue, with MSOs being the biggest beneficiaries. He believes the Canadian LPs are worth investing in as well, which is why YOLO holds shares of them. Canopy Growth Corp. is 38.6% owned by Constellation Brands Inc. STZ, -1.00%, the brewer of Corona and Modelo beers, which has many other well-known consumer brands and holds warrants allowing it to take a majority stake in Canopy.

This gives Canopy deep pockets — the company has an agreement with Acreage Holdings Inc. ACRHF, -2.71%, another U.S. MSO, through which Canopy would acquire Acreage Holdings in the event of “changes in U.S. federal law to permit the general cultivation, distribution and possession of marijuana or to remove the regulation of such activities from the federal laws of the United States.” That language comes from page 9 of Canopy’s 10k report for its fiscal year ended March 31, 2020.

MSOs have a bigger business already

Here’s a comparison of the past four quarters’ sales data for the five LPs and four MSOs. The companies’ fiscal quarters aren’t uniform, so the as-of date for the most recent reported quarter’s data that was available from FactSet on Feb. 18 is in the right-most column.

The most recent quarter is marked Q0, the previous quarter is Q-1, and so on. All data in all the tables is in millions of U.S. dollars.

Scroll the table to see all the data. For four quarters, the five LPs had combined sales of $ 1.284 billion, which was up 24% from the previous four-quarter period. If we divide the combined market capitalization of $ 33.785 billion by the past four quarters’ sales, the trailing price-to-sales ratio for the group is 26.3.

Again, you will need to scroll the table to see all the data. For four quarters, the five MSOs had combined sales of $ 1.715 billion, an increase of 163% from the previous four-quarter period. If we divide the combined market capitalization of $ 21.862 billion by the past four quarters’ sales, the trailing price-to-sales ratio for the MSOs group is 12.7

So the MSOs are growing their sales much more quickly and have a much lower valuation to sales.

Don’t miss: I’m looking for a cannabis-friendly red-leaning state with no state income taxes — where should I retire on $ 60,000 a year?

Maybe the valuation difference shouldn’t be such a surprise. The MSOs are only traded over the counter. So individual investors need to go out of their way to invest in them, or go with the YOLO or MSOS ETFs.

Here’s another set of data, this time comparing net cash from operating activities for the two groups.

Even though Tilray reported its fourth-quarter results on Feb. 17, the cash flow information above for the company is only through Sept. 30. This is because the Feb. 17 report didn’t include a statement of cash flows.

The LPs as a group had negative cash flow from operations for all periods, according to FactSet’s data.

The MSOs as a group had positive cash flow from operations for three of the four quarters and for the combined four quarters.

During an interview Feb. 17, Tim Seymour, the portfolio manager of CNBS, said AdvisorShares has done “a nice job building a business where they have the ability to invest in companies I would like to own.”

He also said that Amplify had taken a “more conservative approach” when it established CNBS in July 2019 because the SEC had not made a broad ruling on allowing mutual funds or ETFs to invest in MSO total return swaps.

In addition to managing CNBS, Seymour is on the investment committee of JW Asset Management, a $ 2 billion hedge fund focused on the cannabis industry.

“I am investing in companies that I believe are representative of the best exposure to investors for the best returns right now,” Seymour said. He also emphasized the importance of active management in the space.

He agrees with Ahrens about the importance of the U.S. market, especially if and when Congress fully legalizes marijuana and enables financial-services companies to treat the industry as it would any other legal industry.

Canopy Growth Corp. is the largest holding of CNBS and Seymour pointed to the Acreage Holdings agreement as an example of how a very-well-funded Canadian LP can be instantly transformed into a major U.S. player with full legalization.

During an interview Feb. 16, Christian Magoon, the CEO of Amplify ETFs, said CNBS was the best-performing U.S. ETF during 2021 through Feb. 15, excluding inverse and leveraged ETFs. He also said the firm was “actively exploring the possibility that CNBS will be able to invest in derivative securities.”

So it is possible that at some point CNBS will be making indirect investments in the MSOs as well.

Here’s a comparison of total returns for the three actively managed ETFs, as well as the ETFMG Alternative Harvest ETF MJ, -5.10%, which is passively managed and is the oldest cannabis ETF. 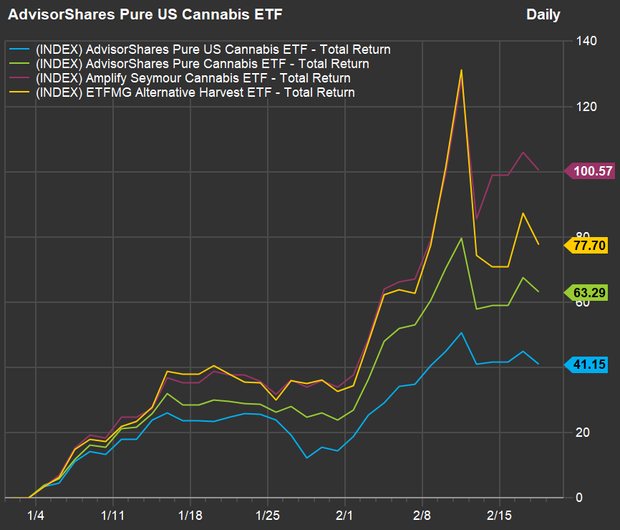 All have made dramatic upward moves this year, but you can see that CNBS has doubled, followed by MJ and the two AdvisorShares ETFs.

The AdvisorShares Pure US Cannabis ETF (MSOS) was established in September 2020. So this next chart compares total returns for the other three ETFs during 2020: 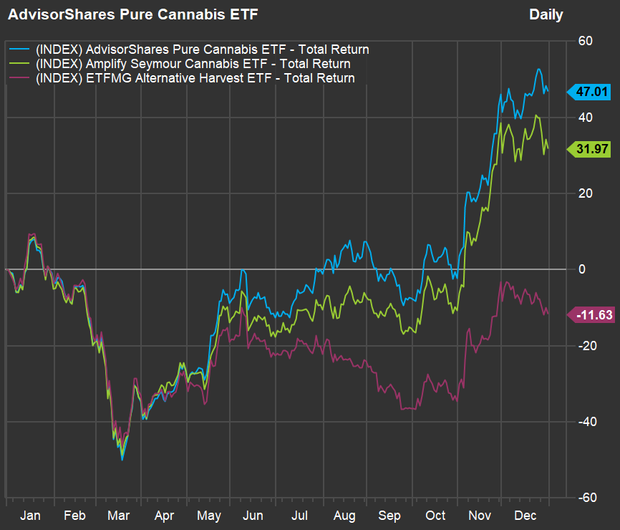 So last year YOLO, which holds MSOs as well as LPs, was the best performer, while MJ’s passive approach underperformed. YOLO and CNBS both achieved significant returns, even though all five LPs were mixed, with brutal declines for Tilray and Aurora Cannabis shares: 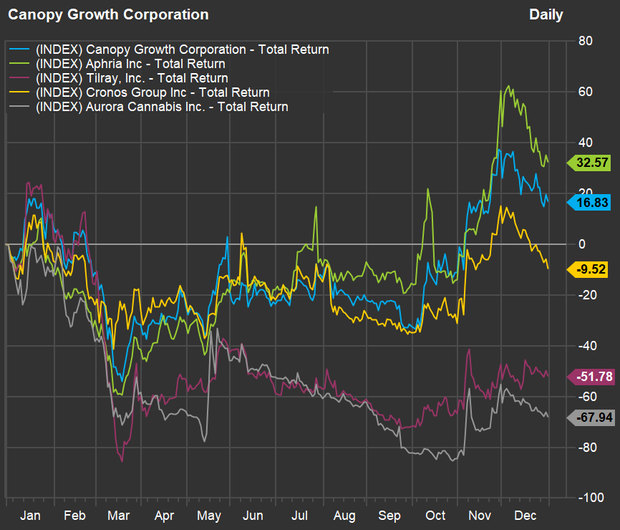 : The good news: Americans’ financial security soared last year. The bad news: That may be due to this lucrative, but temporary tax break

: The No. 1 emerging property market in America isn’t in Texas or Florida — you may never even have heard of it

: This accounting firm will let staff choose start times — and clock off early in the summer