The Nasdaq and S&P 500 eked out modest gains on Thursday with investors betting on more fiscal stimulus, but U.S. President Joe Biden said China was poised to “eat our lunch,” a warning that tempered enthusiasm for a market near record highs.

Nvidia Corp rose 3.2% and Intel Corp 3.1%, making technology the leading sector to gain on the S&P 500 and Nasdaq. Declining shares outnumbered gainers on the Nasdaq and New York Stock Exchange.

Biden told a group of U.S. senators in a meeting to discuss the need to upgrade U.S. infrastructure that the United States must raise its game in the face of the challenge from China.

The warning about China and Democrat plans to include raising the minimum wage to $ 15 in a $ 1.9 trillion stimulus package showed headwinds for investors could be on the rise, said Ed Moya, senior market analyst at OANDA in New York.

“Markets are starting to get a little bit nervous over the relations between the West and China,” Moya said.

Biden’s first call late Wednesday with China’s President Xi Jinping “resurfaced all of the difficulties that we’re going to face this year in addition to the pandemic,” he said.

The Democrats also are not in agreement on where they stand on the minimum wage, he said. “This is dragging out stimulus talks.”

Mastercard rose 2.6% after the credit-card company said it was planning to offer support for some cryptocurrencies on its network this year, joining a string of big-ticket firms that have pledged similar support.

Bank of New York Mellon advanced 0.9% after saying it had formed a new unit to help clients hold, transfer and issue digital assets, sending Bitcoin to an all-time high of $ 48,696.

The number of Americans filing new applications for unemployment benefits were 793,000 last week, compared to 812,000 in the prior week, but they are well below the record 6.867 million reported last March when the pandemic hit the United States.

Analysts now expect fourth-quarter earnings for S&P 500 firms to grow 3%, versus a 10.3% decline forecast at the beginning of January, per Refinitiv data. Stocks are trading with high multiples, raising fears the market is overvalued.

“The market is certainly fairly valued. I don’t see the overall market as horribly overvalued,” said David Trainer, chief executive of New Constructs, a research firm in Nashville, Tennessee “There are pockets of stocks, we call them micro bubbles, that are extremely overvalued.”

The tech sector and semiconductors hit record highs, while economy-linked energy and industrials took a back seat after being in the spotlight this year.

Volume on U.S. exchanges was 17.69 billion shares, compared with the 15.96 billion average for the full session over the last 20 trading days. 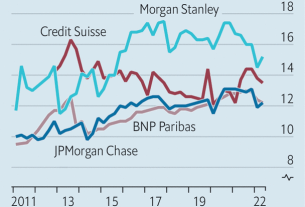 Financial markets are in trouble. Where will the cracks appear?

Dow hits an all-time high, bonds sell off as investors bet on recovery