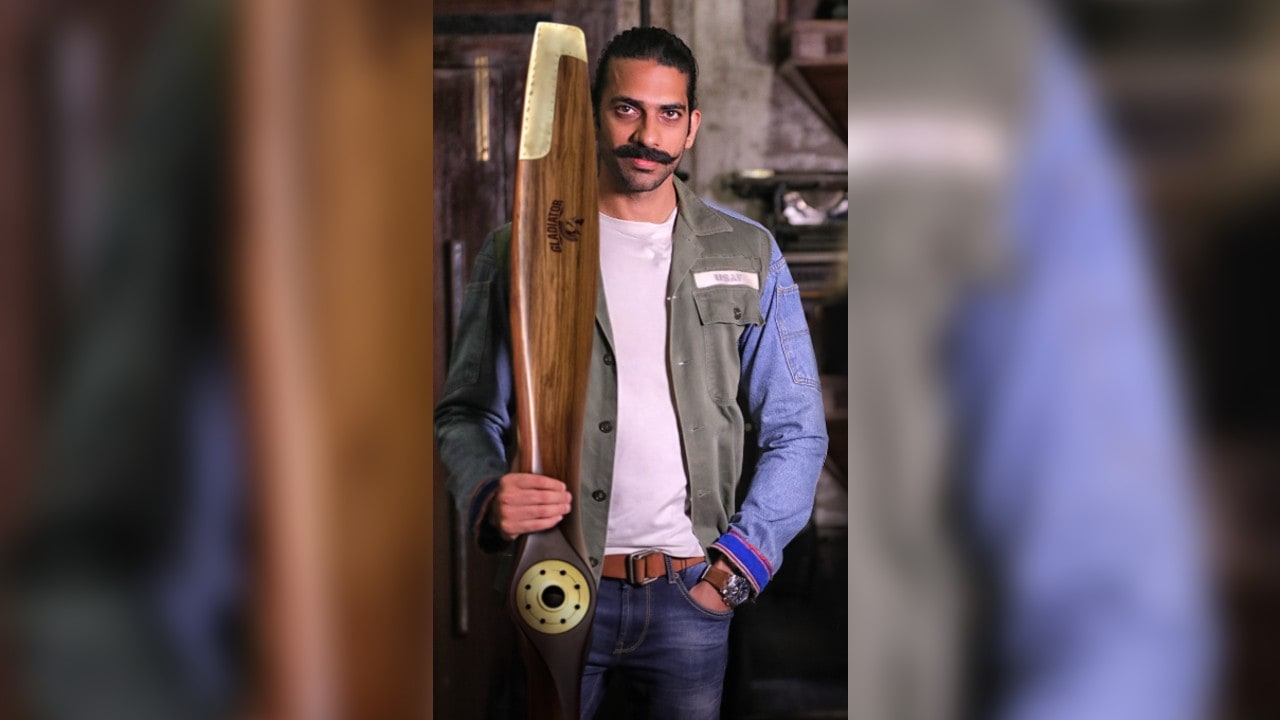 For hobby pilot and brand consultant Akshay Sharma, a venture that began in a serendipitous moment — when he could not find a wooden replica of a vintage aircraft propeller he wanted as a decor accessory for his newly built home — is now paying global dividends.

His boutique decor brand, WoodFeather, has been picked by Paramount Pictures’ Top Gun franchise, starring Tom Cruise, to design, create and sell, globally, propellers inspired by Maverick, the next movie in the super-successful series. 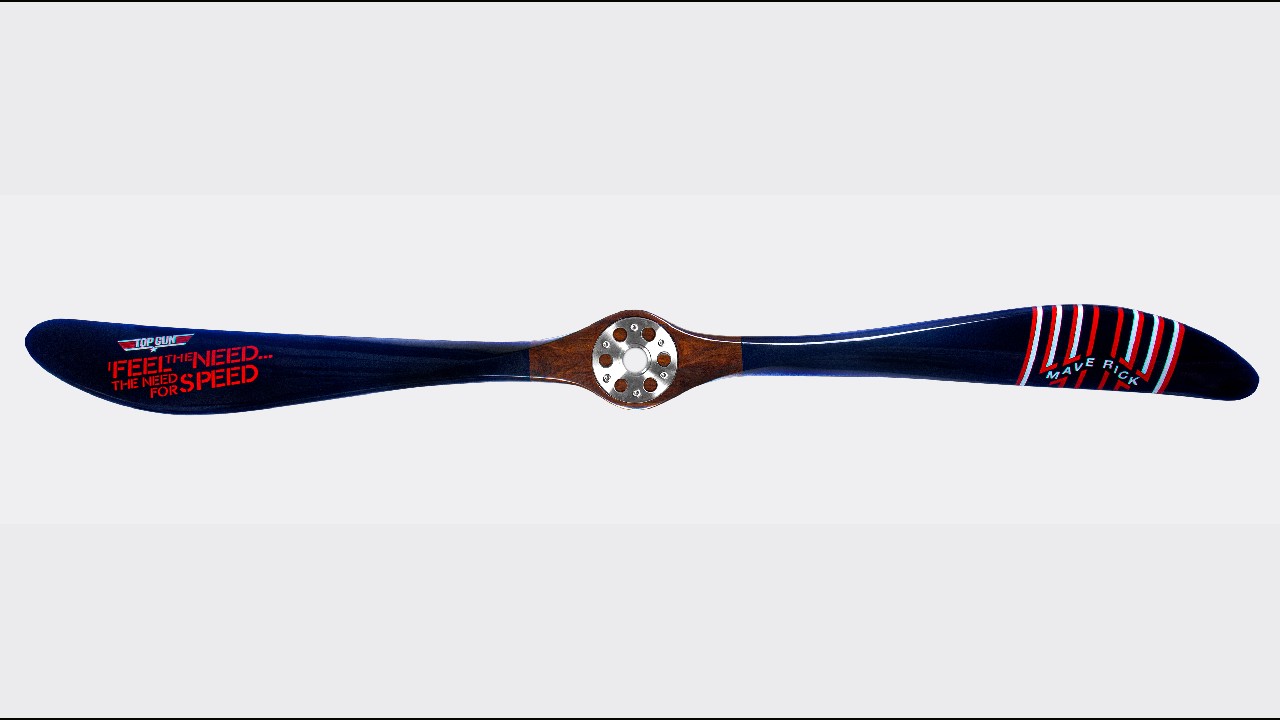 Two years ago when Sharma stumbled upon an article on Maverick, which will release in July 2021, something sort of clicked in his head. “I felt goosebumps go up my arms. It would have been a missed opportunity if I did not do something with Top Gun,” he says, the excitement palpable in his voice. Several disruptions — caused by Black Lives Matter protests and the COVID pandemic — later, the Burma teak art décor propellers have been launched on the WoodFeather website, from where they can be ordered.

It takes sheer audacity for someone to believe that they can work with Tom Cruise and the Paramount team without knowing a soul in the company. It takes tenacity to see it through. 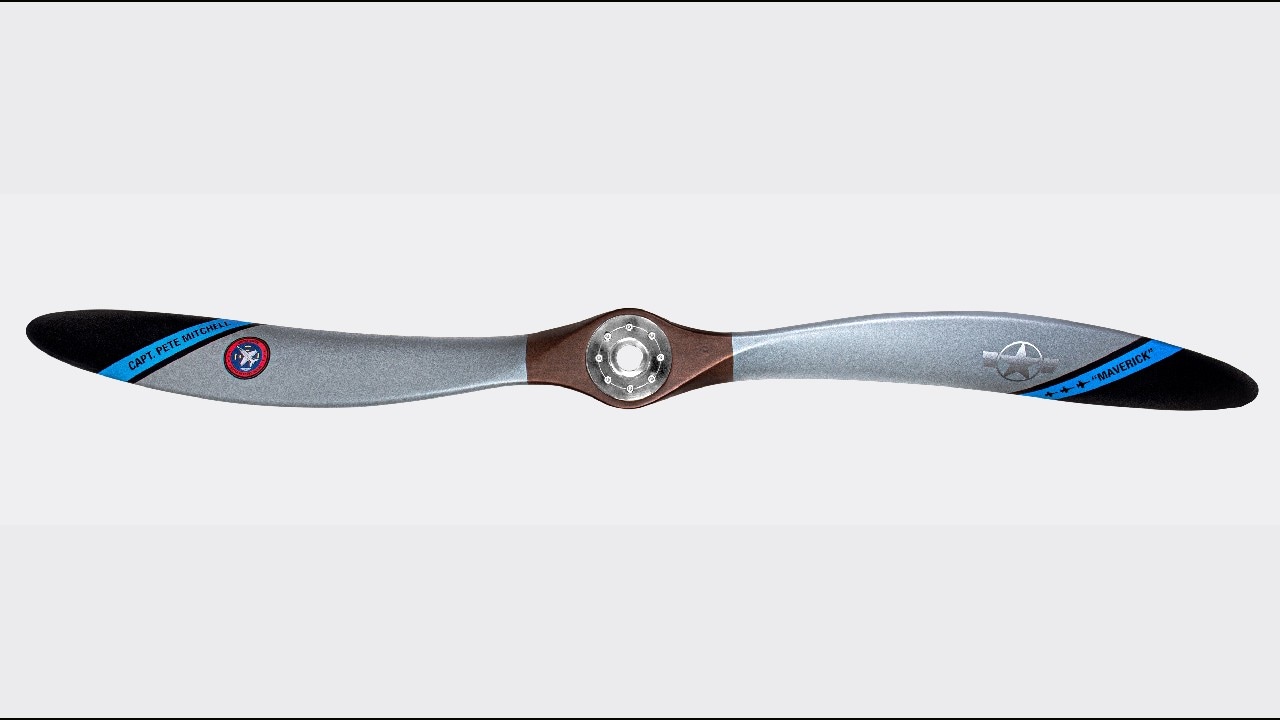 “I made a couple of experimental pieces, tweeted them and tagged Paramount’s official Twitter handle, stating I am a fanboy, showcasing what I had made, and asking if they had an India office.” Someone from the LA office forwarded the tweet and his contact to Bhavik Vora, CEO of Black White Orange, who is Paramount’s merchandising partner in India. “Incidentally, I had sold a propeller to Adik Mehta, the design head of his company, and he had taken it to the office to flaunt it.”

All the segments of this Rubik Cube fell into place perfectly and Vora asked Sharma to make a pitch, which first went to Paramount’s Singapore team, then to LA, and finally to Tom Cruise, who is involved in all decisions related to one of cinema’s richest, and biggest, franchise properties. 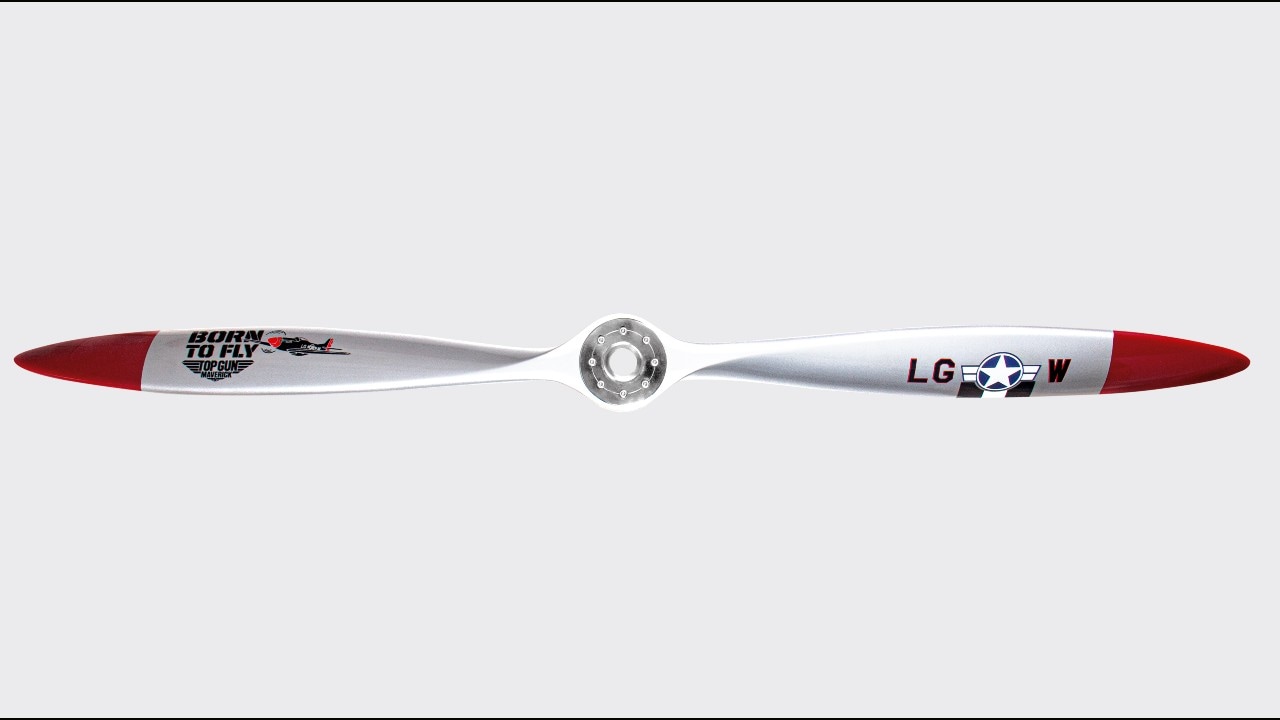 Sharma has created four striking designs for his Top Gun collection, based either on the movie’s characters or the spiffy aeroplanes that feature in it. “There is one inspired by the blue helmet, with white and red stripes, worn by Maverick,” he says. Everything, from the colour, the decals and the famous movie dialogues have been translated into the design of the propeller. “For another piece, Wingman, we have taken individual patches of the eight pilots from the Top Gun Academy and put them on the propeller. Among the striking pieces is F/A-18, inspired by the fighter jet that Tom flies in the movie. The fourth piece has P-51D — a vintage aeroplane that he flies as a hobby in the movie — as its muse. The plane, incidentally, is Tom’s aircraft.”

Each of the wall art pieces will be handcrafted from Burma teak reclaimed from old bridges, structures, railway tracks, or bought at auctions. There is a ban on selling Burma teak from an existing tree or growing trees to harvest the wood and only old, reclaimed pieces are available. The handcrafting process takes all of six to seven weeks. The propellers are priced between USD 1100 or 1200, depending on the complexity of the design. 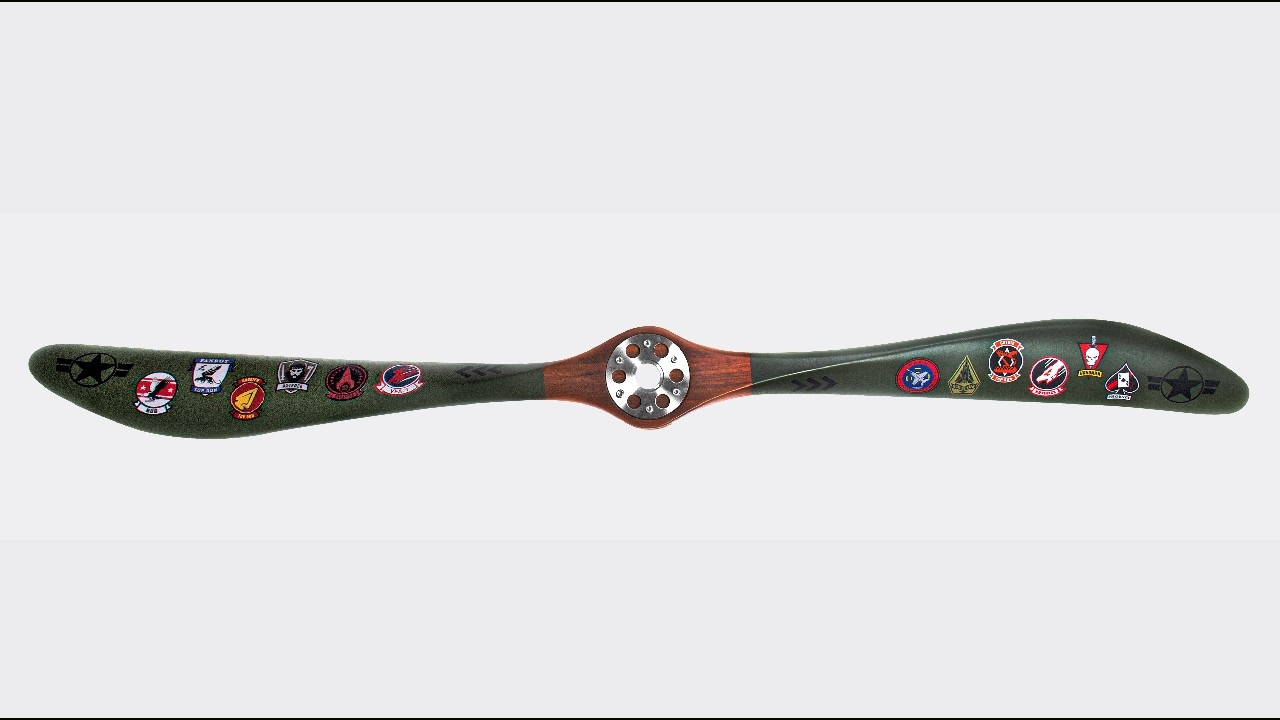 The offbeat world of aviation decor

For Sharma, the passion for flying has come full circle. “My design business is inspired by my love for aeroplanes. They are essentially modelled on World War I or pre-World War I aircraft, which were powered by wooden propellers. I take creative liberty to work with certain kinds of wood that were never used to make propellers back then, just so that the art pieces look gorgeous.” The vintage-looking Classic Collection is crafted from wood such as maple and mahogany. In striking contrast is the Signature Collection, with funky painted propellers. 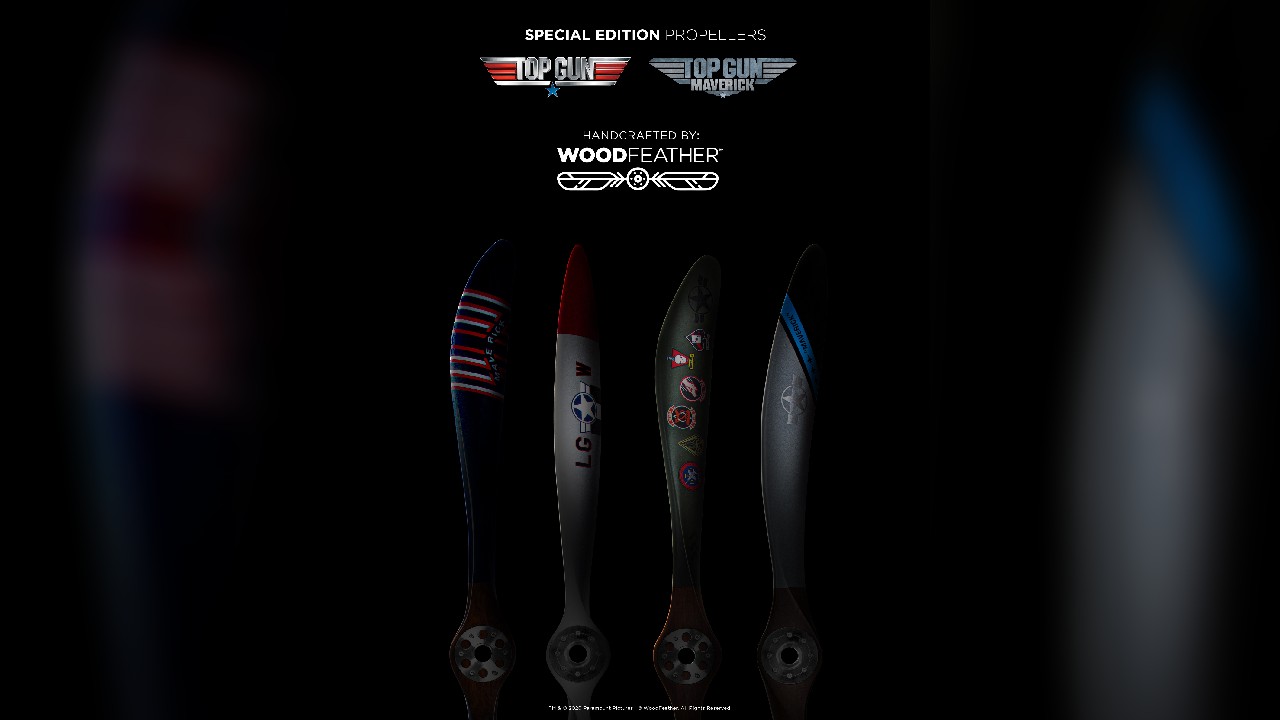 To ensure complete personalisation, Sharma, who is the designer, brand manager and marketer of WoodFeather, jams with his clients to understand what they are looking for and where they are likely to display the propeller. “Sometimes, they ask for their name to be embossed on it, sometimes it is an important date or signature. They treat it like an heirloom.”

The statement propellers are usually ordered by flying enthusiasts or owners of luxury homes who are looking for an unusual art object. Several of his clients are based internationally, even though sending a piece abroad is a cumbersome process, requiring him to fill over 25 forms. But the market is lucrative and Sharma hopes his Top Gun collection will be his calling card for bigger business in global markets. 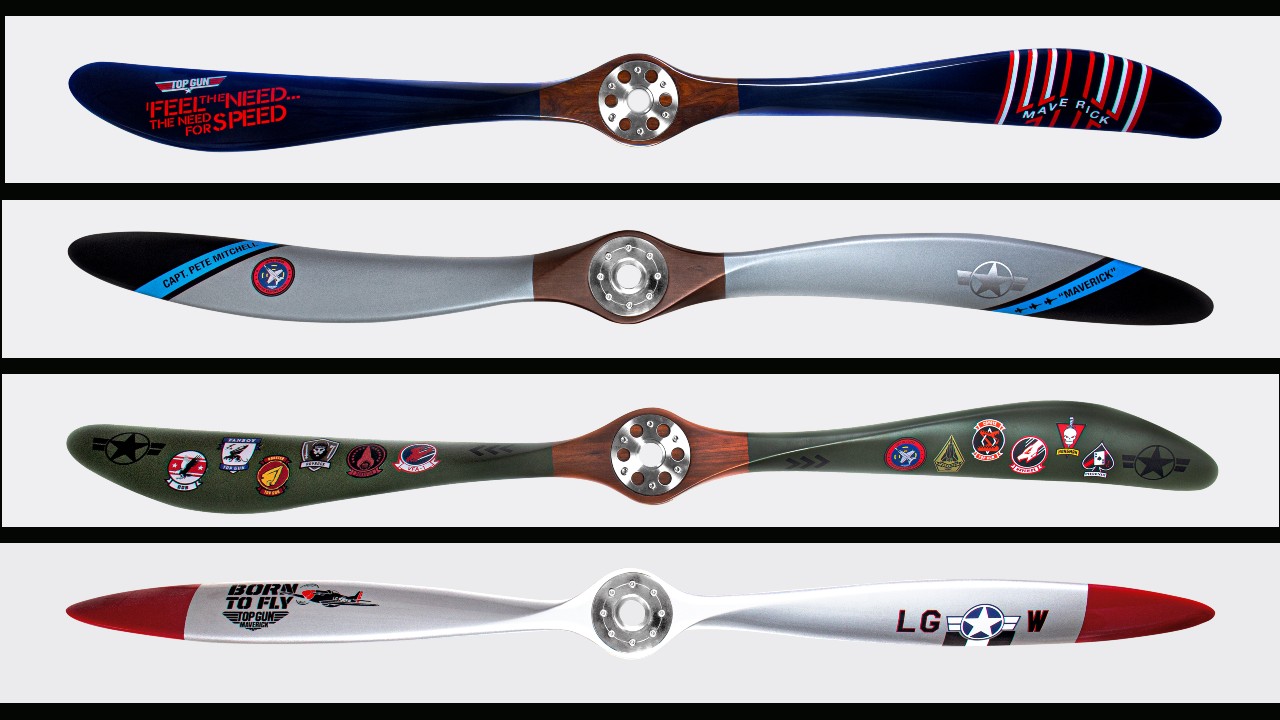 Internationally, aviation decor is a thing but in India, it is still considered rather offbeat. Sharma has forgotten the number of times when people have mistaken the propellers to be ceiling fans at the design exhibitions he showcases at. After the Top Gun collaboration, the perception will hopefully change.