It is time for Amazon.com Inc. founder Jeff Bezos to take his turn as the founder/senior statesman — like the Wizard of Oz, often unseen but with seemingly omnipotent control — while the boss of Amazon’s cloud-computing arm takes the lead.

The change at the top won’t change much about Amazon AMZN, +1.11%, but could affect the most crucial choice the company faces: Whether Amazon Web Services and Amazon.com remain under the same roof.

While Bezos is often compared with Apple Inc. AAPL, +0.63% co-founder Steve Jobs, his departure from the CEO role more closely resembles the passing of batons by tech CEO legends like Bill Gates of Microsoft Corp. MSFT, -0.06% and Larry Page of Alphabet Inc. GOOG, +1.38% GOOGL, +1.38%. Bezos is stepping down as CEO as the company hits new records, but will remain chairman of the e-commerce giant he founded in the early days of the dot-com bubble.

Just as Page handed over the reins to the leader of his most profitable division, Sundar Pichai — first as CEO of Google and then Alphabet — Bezos tabbed Andy Jassy from the company’s biggest profit generator, Amazon Web Services. Addressing his post-CEO ambitions, Bezos on Tuesday sounded more like Gates, who went on to build one of the largest nonprofits in the world.

“I’ve never had more energy, and this isn’t about retiring,” Bezos said in an email to employees that detailed plans for the Bezos Earth Fund nonprofit, rocket-building at Blue Origin and his ownership of the Washington Post. “I’m super passionate about the impact I think these organizations can have.”

At Amazon, Chief Financial Officer Brian Olsavsky said Bezos would be involved in what Amazon calls “one-way-door issues” — large strategic decisions, such as the acquisition of Whole Foods.

“Jeff’s always been involved with that, and that’s where we’ll keep his time focused on,” Olsavsky told analysts on the company’s earnings call.

That really won’t mean much of a change externally, and likely internally as well. Those kinds of big swings have seemed like the things Bezos has long focused on, while leaving the day-to-day management to lieutenants. In more recent years, Bezos has been less the public face of Amazon, amid so much attention on his growing wealth, the commercial race to space, and his recent status as a media magnate. He does not participate in quarterly earnings calls with Wall Street and instead writes an annual shareholder letter and presides over Amazon’s annual general meeting. More recently, his public appearances have ranged from elite technology conferences, when they were still a thing, to congressional testimony in recent antitrust congressional hearings.

Jassy will also have to prove himself capable of running more than just AWS, which is a critical part of Amazon but nowhere close to the scope of the full company.

“They are digital commerce, they are a grocery store, they are a trucking company, they are in shipping, warehousing and manufacturing. They have a lot of people in their ecosystem, a lot of blue-collar workers, they were the largest employer in the pandemic. There are a lot of things going on,” Daniel Newman, principal analyst at Futurum Research, said.

“Andy was literally prototyping his ability to lead Amazon, through his work at AWS,” Neman added. 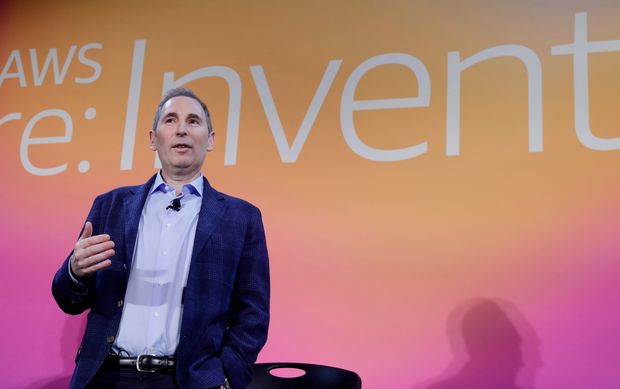 One conundrum Jassy may face when he is in the CEO seat later this year is the biggest question about AWS: Will it remain part of Amazon? Jassy has worked on AWS since the beginning and has been its most vocal proponent, so it seems unlikely that he would choose to separate it from the company he now runs.

Scott Galloway, a professor at New York University’s Stern School of Business, predicted in a recent book that Amazon could spin off the business, possibly to head off any antitrust actions the government may take with Big Tech over the next year or so. On Twitter, Galloway was asked Tuesday about his prediction, and said Jassy’s promotion likely reduces the odds of that happening, while highlighting Bezos’s achievements.

“I think [a potential AWS spinoff] is one of the issues that Andy will have to deal with in some form,” Gartner’s Anderson said. “This has been one of those things growing over time. There are good arguments to make both ways. They operate as pretty independent organizations right now.”

Bezos will surely have his say in that decision, just as Gates had a say in Microsoft’s direction until last year. It may seem unthinkable for investors to imagine Amazon without the visionary Bezos, but he could remain as executive chairman for years, even decades, as Gates proved.

Investors should hope that Jassy is more like Microsoft’s current chief executive, Satya Nadella, than Gates’s immediate successor, Steve Ballmer, who struggled to move Microsoft into the mobile era. As Jassy attempts to maneuver Amazon into its next era, Bezos will still be around to make sure he succeeds.