There are expectations that Finance Minister Nirmala Sitharaman may announce recapitalisation for PSU banks.

Most PSU banking stocks traded higher in early trade ahead of the Union Budget 2021 amid expectations that Finance Minister Nirmala Sitharaman may announce recapitalisation for them.

While measures such as PSU mergers, recapitalisation package of Rs 70,000 crore were announced for FY20, the government may announce the road-map ahead for capital infusion and propose measures to strengthen PSU banks.

The Economic Survey 2021, released on January 29 ahead of Budget 2021, called for adequate capitalisation of public sector banks. If capital is not provided, lenders may resort to risk-shifting, it said. In turn, impacting the real economic recovery.

“Under-capitalised banks may again resort to risk-shifting and zombie lending, thereby severely exacerbating the problem. The adverse impact could then spill over to the real economy through good borrowers and projects being denied credit. The resultant drop in the investment rate of the economy could then lead to the slowdown of economic growth,” the Survey said.

This warning is significant since the credit growth has plunged to record low levels in the recent months on account of a range of factors including general economic slowdown and muted demand. Also, banks have been high risk-averse to lend to smaller firms due to high-risk perception.

Shares of SBI, Bank of Baroda, Canara Bank traded with gains, keeping the Nifty PSU Bank index up about a percent at 1035 hours. 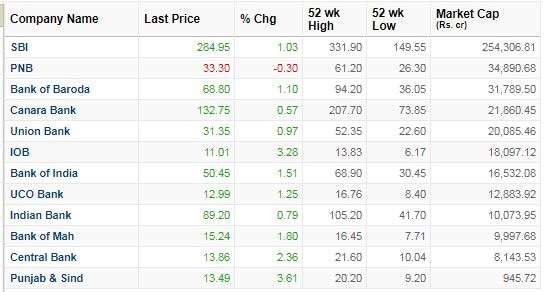 Gainers Losers: 10 stocks that moved the most on August 30