Asian shares slid on Thursday while the safe-haven dollar rallied as a sudden sell-off on Wall Street and delays with coronavirus vaccines shook investor optimism about an early recovery for the global economy.

MSCI’s broadest index of Asia-Pacific shares outside Japan fell 1.2%, with valuations looking stretched given the index had risen more than 6% just this month.

Even the tech darlings were not immune with Facebook down despite reporting earnings well above expectations. Apple Inc also handily beat forecasts, yet its shares lost 3% after the bell.

There was a hint of resilience in Asia as U.S. stock futures pared steep early losses, leaving Eminis for the S&P 500 off 0.1% and NASDAQ futures down 0.2%.

There was no obvious trigger for the rout, rather many seemed to have rushed for the exits at the same moment in a market that had been priced for perfection.

Dealers said highly leveraged investors were taking profits where they could to cover losses elsewhere, leading to sharp falls in a lot of overcrowded trades.

Some pointed a finger at retail investors who had forced a massive squeeze on hedge funds with short positions in stocks such as GameStop.

”The Reddit army should prepare for stricter rules and regulation shortly, which should kill the idea that what happened with GameStop will happen with others,” said Edward Moya, a senior market analyst at OANDA.

The dogged optimism that vaccines would heal the global economy in just a few months has been strained by the outbreak of new variants and problems with the distribution of shots in the United states and Europe.

Dealers noted the market had also chosen to focus more on a downbeat economic outlook from the Federal Reserve overnight than on its pledge of continued policy support.

”The Fed’s acknowledgment of a slowdown in the pace of the recovery and dependency on vaccine roll out are not new news, but it does provide equity investors a bit of a reality check, pushing out the timing for recovery,” said Rodrigo Catril, a senior FX strategist at NAB.

The euro fell back to $ 1.2093 amid reports the European Central Bank felt markets were under pricing the risk of more rate cuts.

Commodity linked currencies were hit by all the economic angst, with the Australian and New Zealand dollars both shedding more than 1% overnight.

The bounce in the dollar kept gold prices soft around $ 1,836 an ounce.

SP 500 closes at record high, lifted by Nike and banks 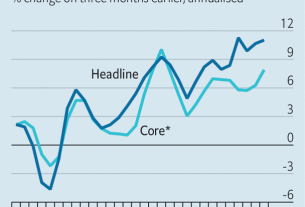