After many weeks of strong run up, Indian equity market saw some amount of nervousness in this week after 8 consecutive weeks of maintaining positive momentum in the market. Nifty gyrated in range of 14,250-14,750 level.

The week started on negative note with a percent of loss in first day. After that buying was seen in the next couple of sessions and cumulative gains erased the loss of the first session. In the last two sessions, Nifty made all time high of 14750, but Nifty could not sustain and lost nearly 2% from there, that led the Nifty to close on negative note for the week. Overall, Nifty lost marginally 0.5% in this week.

Same as Nifty, Bank Nifty also closed on the negative note in this week. Bank index started off on a weak note. Recovery in the next two sessions of almost 2.4% brought the index back on track. However, the decline in the last session erased most of the gains accumulated so far for Bank Nifty as well. Overall, Bank Nifty ended up losing 3.5% in this week.

On the Open Interest front, Nifty Future OI (open interest) did not have any major movement this week, Unwinding was seen in the first day by 3%. In next couple of sessions, as the prices were raising, OI also increased nearly 5%. Nervousness among the participants was seen by the end of week. Weak sessions brought back-to-back unwinding of longs in the index. This resulted in a one and half percent drop in Nifty futures OI for the week attributed to Long Unwinding.

Bank Nifty, on the other hand, started off with around 10% short OI Built up. Followed by tiny long in the next session and short covering of 6% in 3rd session. Bank Nifty had strong short built-up in the last two days of the week, adding cumulative 24% OI. This resulted in nearly 30% increase in OI for the week attributed to Short Built up.

Aggregate OI down by 3%. Nearly 50% of stocks added shorts and 20% of stocks witnessed unwinding of longs.

Slicing the futures into sectors we could see, most of the stocks and sectors added shorts this week. Cement added shorts across the sector except UltraTech Cement. SBI and PNB from PSU Banks added notable shorts. Oil was the only sector witnessing meaningful unwinding of shorts led by Reliance.

Sentimentally speaking, OIPCR for Nifty increased during the week. In the week OIPCR increased from 1.18 to 1.58 showing the aggressiveness of Put writers. However, decline in the index made Put writers to calm in the last two sessions of the week and OIPCR closed at 1.16 for the week.

Same as Nifty, Bank Nifty OIPCR also remained more or less same for the week. At last, looking towards the Risk side, India VIX gradually declined from 24.39 to 22.32 on week over week.

Finally, Bank Nifty added shorts for the week after many previous periods. Bank Nifty OIPCR of 0.6 remains heavily in favour of bears. The lower end of congestion in Bank Nifty signified by heaviest Put remains at 30000. This, considering fresh shorts in Bank Nifty a hedge against further weakness can be created via Modified Put Butterfly.

Modified Put Butterfly is a 4-legged strategy where 1 lot of Put close to current underlying level is bought against that 2 lots of lower strike Puts are sold and 1 more lot of Put is bought but closer to the Put sold strike. This keeps the lower but constant profits in case of downward breakout. This is a fairly risk averse and a universal strategy. 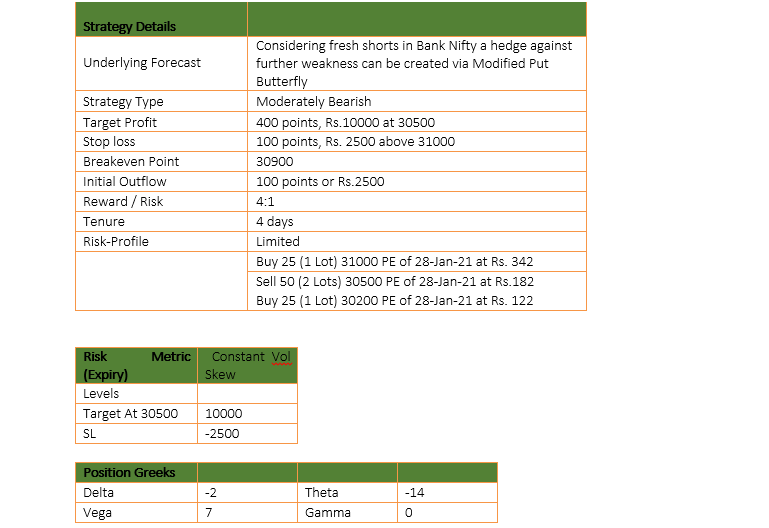 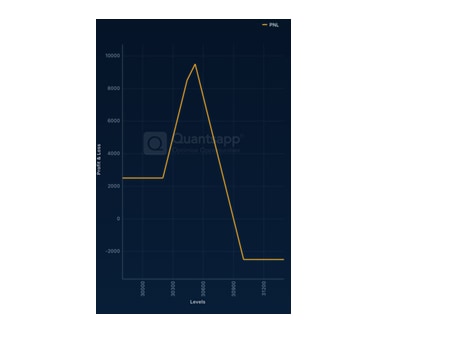