The S&P 500 and Nasdaq closed at record highs on Thursday, propelled by optimism about more pandemic relief under the Biden administration to support the economy after data showed a tepid labor market recovery.

The Dow was also poised for a record until falling into negative territory in the final minutes of trading.

The number of Americans filing new applications for unemployment benefits dipped to 900,000 last week but still remained stubbornly high as the COVID-19 pandemic tears through the nation, raising the risk that the economy will shed jobs for a second straight month in January.

But other data showed the housing and manufacturing sectors as areas of strength to help buttress the economy.

“We’ve had a very strong momentum going into this year and coming into the Biden administration… because of prospects of a bigger stimulus check and more spending in general,” said Mohannad Aama, managing director at Beam Capital Management LLC in New York.

The Nasdaq Composite advanced, boosted by a jump in shares of megacap stocks such as Alphabet Inc, Apple Inc and Amazon.com Inc ahead of their earnings reports in the coming weeks.

It follows Netflix Inc’s blowout results on Wednesday that revitalized the “stay-at-home” beneficiaries, adding $ 262 billion in overall market capitalization to the FAANG group of stocks.

“Given the possible surge in COVID cases, investors are going to go back to the old playbook that worked well at similar times last year… (The) technology sector is performing well and (so is) anything related to working from home,” Aama added.

President Joe Biden has launched several initiatives during his initial days in office, including ramping up testing and vaccine rollouts.

Technology, consumer discretionary and communication services which includes Alphabet and Facebook, were the only S&P sectors in green.

With valuations near a 20-year high, corporate results could present an important test of whether the stock market rally has run ahead of fundamentals.

Intel shares soared late in the session as its earnings report was released early and it forecast first-quarter earnings and revenue above expectations. The chipmaker’s shares closed up 6.46%.

United Airlines Holdings Inc dropped 5.73% after posting a fourth straight quarterly loss due to the COVID-19 pandemic but said it aims to cut about $ 2 billion of annual costs through 2023.

Declining issues outnumbered advancing ones on the NYSE by a 1.49-to-1 ratio; on Nasdaq, a 1.30-to-1 ratio favored decliners.

Volume on U.S. exchanges was 13.34 billion shares, compared with the 12.92 billion average for the full session over the last 20 trading days. 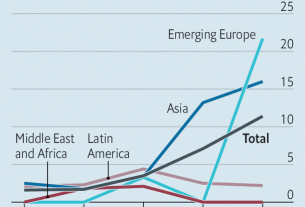 Why inflation refuses to go away