The Nifty50 extended rally and hit a fresh record high on January 20, led by positive global cues and better-than-expected quarterly earnings so far. Auto, IT, Metals and PSU Banks supported the market.

The index recouped all its previous three-day losses in two consecutive sessions and formed a bullish candle again on the daily charts as closing was higher than opening levels.

Given the strong comeback of bulls, the index may extend current rally to 14,900 levels in the coming sessions, experts feel.

India VIX declined further by 5.90 percent from 22.89 to 21.55 levels, which could also play a supportive role for the bulls. “Volatility needs to cool down below 20 mark to commence the fresh leg of rally for the fresh life-time high territory. However, volatility could be comparatively higher ahead of the Budget 2021,” Chandan Taparia of Motilal Oswal Financial Services said.

“Bulls continued their domination as Nifty50 hit yet another new life time high by recouping three trading sessions of losses from the highs of 14,653 to a low of 14,222 in just two trading sessions. This faster retracement of last leg of fall is hinting that bottom is in place at recent low of 14,222 levels and a fresh leg of upswing is in progress,” Mazhar Mohammad, Chief Strategist – Technical Research & Trading Advisory at Chartviewindia.in told Moneycontrol.

Hence, according to him, ideally if the index sustains above 14,500, then the rally may get extended towards 14,900 levels. But if it slips below 14,500 levels, then some sort of consolidation can be expected but trend may once again start favouring bears only when Nifty slips below 14,350 levels, he said.

Bank Nifty opened lower at 32,388.95 and moved in a consolidative fashion with buying on declines throughout the day. Positive undertone continues in all the banking stocks and the index closed with gains of 118.90 points at 32,543.70.

The index formed a bullish candle on daily scale and continued its formation of high highs – higher lows from the last two sessions.

“Now it has to continue to hold above 32,200 zone to witness an upmove towards 32,750 and 33,000 levels while on the downside support is seen at 32,000 and 31,750 levels,” Chandan Taparia, Vice President, Analyst-Derivatives at Motilal Oswal Financial Services said. 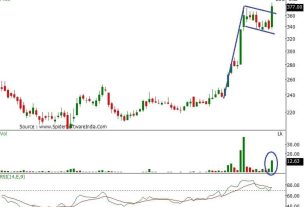 Trade Spotlight | What should you do with Wonderla Holidays, DCB Bank, Poonawalla Fincorp on Monday?

How to use Futures to mitigate systematic risk while investing