The market started the week on a very optimistic note, however, towards the end of the week, the momentum fizzled out and it snapped most of the gains of the entire week on Friday.

It witnessed a tug of war like situation between the bulls and the bears, both made their share of attempts to drag index on the either side. Thus, huge volatile swings were witnessed in the Nifty index. In this entire week, the Nifty index traded in a range of 300 points and formed a Doji candlestick pattern on the weekly scale which indicates indecisiveness amongst participants.

The Nifty index faced stiff resistance at 14,653 levels and failed to surpass the same which will now act as a major hurdle. On the downside, the immediate support is placed at 14,350 and a breach of the same will attract further selling pressure which might drag Nifty towards 14,200 levels.

The volatility index ‘IndiaVIX’ surged 16 percent to end at 24.01 levels after a span of more than 2 months. As mentioned earlier, ahead of the budget we can expect the volatility to increase further towards 28/30 levels. Thus, one needs to stay cautious and refrain from creating aggressive long/short positions.

The BankNifty index scaled to fresh new highs in line with our expectations but couldn’t sustain at the higher levels and witnessed some amount of profit booking from the same.

The BankNifty index has formed a Doji candlestick pattern on the weekly scale which indicates indecisiveness amongst participants, hence for any fresh momentum on the higher side it has to surpass 32,720 levels. On the downside, the immediate support is placed at 31,600 followed by 31,200 levels.

Based on the data of the Nifty index, we are expecting bears to have the upper hand over the bulls in the coming week. Hence, we are advising to initiate a Bear Put spread where one can buy 1 lot of 14,400 Put strike at 120 and simultaneously sell 1 lot of 14,300 Put strike at 87. So, the total outflow from this strategy is 33 points as per the closing price on Friday. 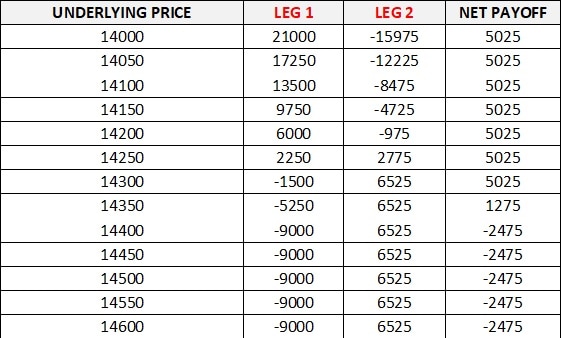 Trade Spotlight | What should you do with Affle India, Indraprastha Gas, Strides Pharma Science on Thursday?

Trade Spotlight: What should investors do with Zee Entertainment, NDTV, DLF, and Tech Mahindra?