05:06 2020
Print This Article
👤by Currencies
Filed under
Currencies

Crude oil price action sent commodity traders on a rollercoaster ride Thursday amid the latest OPEC+ teleconference. The 7% gain recorded earlier in the session, perhaps amplified by a continuation of coronavirus optimism as well as the Fed’s huge loan program just announced, preceded a 20% crash in crude oil from its intraday high, which steered prices about 10% lower on balance. 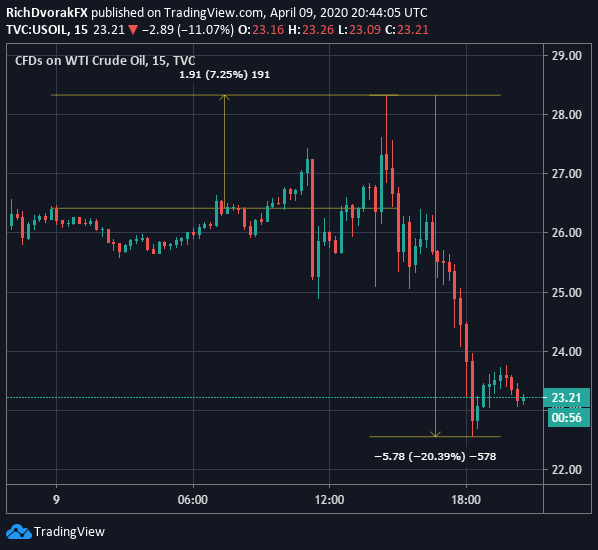 OPEC and its allies agreed to slash crude oil production by 23% during May through June but stated supply cuts are expected to scale back gradually thereon. The OPEC+ deal looks to put a bottom in crude oil prices after crashing 70% earlier this year, initially sparked by economic fallout from the coronavirus pandemic, but was then exacerbated by the oil price war between Saudi Arabia and Russia. 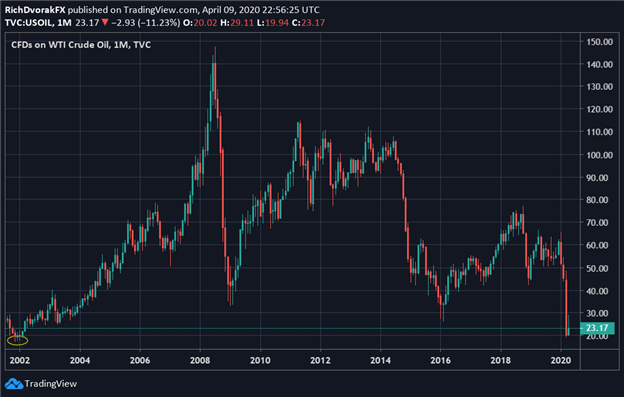 The proposed oil production cuts are expected to fall far short of the estimated collapse in crude oil demand, which has stemmed from the likely unavoidable recession and global coronavirus lockdown. This could explain bearish crude oil price action – a sharp decline of 20% in a matter of minutes – that ensued after details of the OPEC+ deal crossed the wires.

As such, there may be potential for crude oil to drop below $ 20, considering market supply and demand likely remain out of balance, even despite the OPEC+ deal. Also, as the economy struggles to match the consensus view of a ‘V-shape’ recovery, and unemployment spikes further, there could be another wave of risk aversion that adds to recent oil selling pressure. Correspondingly, the 2001 lows near the $ 17.00 price might come into focus if crude oil bears can make a push below the $ 20.00 handle.

Government launches facility for instant PAN allotment via Aadhaar: Here#39;s all you need to know