19:07 2020
Print This Article
👤by Currencies
Filed under
Currencies

Gold price working on breaking out of congestion pattern

Whether the 5-weeks or so of consolidation in gold prices is ready to breakout now, or if another few weeks of sideways movement is ahead of us, the yellow metal is poised to launch again. It appears though there is a good chance we may see gold rally sooner rather than later.

Let’s rewind and play forward from near the middle of 2018.

Gold advanced up to the high in February 2019 before building a three-month bull-flag/wedge pattern. From there is rallied strongly higher into the end of June before undergoing a consolidation phase that lasted about five weeks. This then led gold higher yet again into the September high. That high then gave-way to another three-month bull-flag/wedge pattern. Gold eventually broke out in December with the rally ending on January 8. Since then another shorter-term congestion phase looks to be nearing its end.

The orderly run with repeating price action suggests gold could soon be ready to string together a rally towards 1700 or better. But even if it isn’t ready just yet, and gold turns back down, as long as it doesn’t break strongly through 1536 the near-term congestion pattern will remain intact.

Really, to bring a bullish outlook into serious question, a breakdown well into the 1400s is required at this time. Otherwise, gold is setting up for more gains in the weeks/months ahead. This time it could finally leave behind the pesky 2011/12 resistance levels… 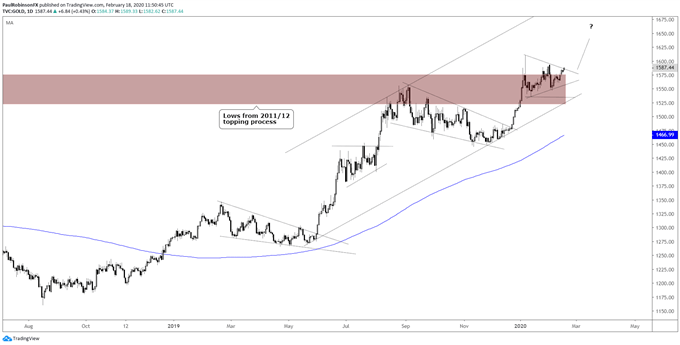 ***Updates will be provided on the above technical outlook in webinars held at 1030 GMT on Tuesday and Friday. If you are looking for ideas and feedback on how to improve your overall approach to trading, join me on Thursday each week for the Becoming a Better Trader webinar series.

Whether you are a new or experienced trader, we have several resources available to help you; indicator for tracking trader sentiment, quarterly trading forecasts, analytical and educational webinars held daily, trading guides to help you improve trading performance, and one specifically for those who are new to forex.

NewsWatch: What the $2 trillion stimulus means for you — and how the ‘recovery rebates’ to households will be calculated