15:06 2020
Print This Article
👤by Currencies
Filed under
Currencies

GBP/USD broke above trendline resistance Wednesday, implying further gains to come. As explained here yesterday, the move is a significant one and positive for the pair, which is now trading above 1.31 after remaining close to 1.30 for the past 10 days. 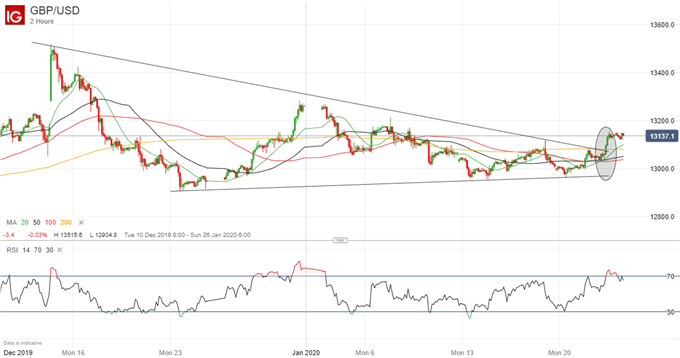 The breakout from the triangle pattern shown on the chart above came as the probability of a quarter-point interest rate cut to 0.5% by the Bank of England on January 30 fell to just over 55% in the wake of data from the Confederation of British Industry showing a sharp increase in business confidence so far this month.

The next important data points for GBP will be Friday’s UK purchasing managers’ indexes, which are expected to have risen in January.

Later yesterday, the Brexit Bill completed its passage through Parliament, with the House of Commons overturning all the amendments passed by the House of Lords. After the formality of Royal assent it will become law and the UK will leave the EU on January 31 as planned by the Government.

Feel free to contact me via the comments section below

Euro Weekly Outlook: No Sign Yet of a Significant Rally