05:08 2019
Print This Article
👤by Currencies
Filed under
Currencies

Check out the intermediate-term fundamental and technical outlook for major markets and currencies in the DailyFX Quarterly Forecasts.

GBP/USD hasn’t done much since the surge in October cooled off, but that is a good thing – so far. The back-and-forth price action is creating a bull-flag, one which following such a strong move could lead to yet another sizable leg higher.

It could take some more time, though, perhaps the entire week ahead and then some, before we see another push to higher levels. In the very near-term, there is a slightly negative tilt to the chart, as bull-flags have this characteristic to them before reaching maturity and triggering.

With that in mind, there is still potential for GBP/USD to take the slightly weakening price action and turn it into a strongly negative price move. At this time, it is viewed as the lower probability scenario, but a reason as to why it is important to wait for these continuation-style patterns to confirm first before running with a strong stance.

The upper parallel needs to be broken before bulls can get too geared up. Should we see Cable take off out of the bullish configuration, once the high at 13012 has been breached, attention will turn to the May high at 13176, followed by the March peak over 13300.

Should price fall out of bed we’ll need to reassess and determine whether it could turn into a full-on reversal or whether it will simply become a deeper retracement that still ultimately leads to richer levels later on. 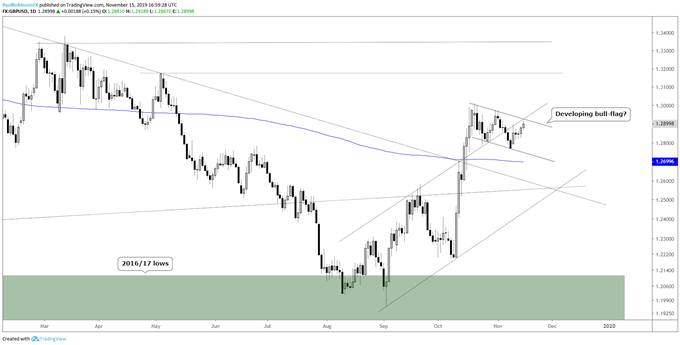 Whether you are a new or experienced trader, we have several resources available to help you; indicator for tracking trader sentiment, quarterly trading forecasts, analytical and educational webinars held daily, trading guides to help you improve trading performance, and one specifically for those who are new to forex.

Crunch time for long/short funds after Lansdowne calls it quits

Financial sector will need to be recapitalised, says Uday Kotak

3 Point Analysis |How can the BMC help Mumbai recover