Federal Reserve Chair Powell testified on Capital Hill before the House Budget Committee today, following testimony yesterday before the Senate’s Joint Economic Committee. Chair Powell’s prepared remarks remained largely the same between the two Congressional committees. In those remarks Powell stated the same key phrase used during the October Fed meeting press conference that a ‘material reassessment’ to the outlook is needed for a shift to the outlook on rates going forward.

Following Powell’s prepared remarks lawmakers questioned Powell on various topics, but prime issues gyrated around trade tensions with China and the growing US debt pile. As more focus turns to the ever-growing amount of government debt as the business cycle continues to age, lawmakers and investors grow increasingly concerned that monetary policy may not provide enough firepower in the event of a prolonged economic downturn or recession. 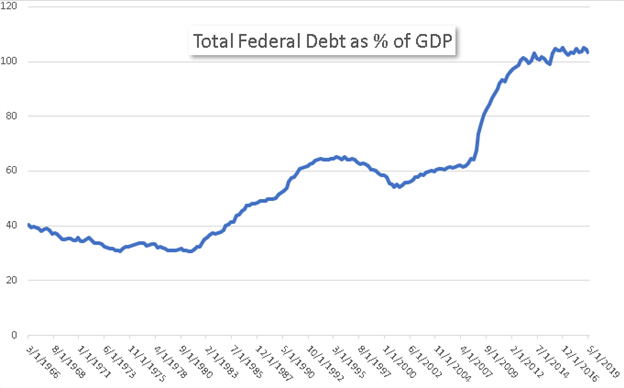 When asked about the ballooning level of national debt, Fed Chair Powell stated, “our debt is growing faster than our economy, by a margin, so that makes it unsustainable”. Powell was referencing the growth of the government’s balance sheet in comparison to GDP growth. Furthermore, the head central banker noted that there is no specific point where the debt would cause a crisis, but that our children and grandchildren would be spending more on interest for that debt, when they could be spending on healthcare, education and security.

Lawmakers also inquired about the recent manufacturing recession in the United States, which has caused concern about a spillover into the larger services sector of the US economy. Powell said the Fed is monitoring that risks but as of now, there is no impact on the services sector.

The repo markets, a popular theme in markets as of late after September’s liquidity crunch caused havoc on overnight borrowing costs between banks was also brought up, with Powell saying that “This is nothing that will effect economic outcomes” and “this really comes down to the level of reserves.” The fed continues to assess the situation in repo markets, as many have been adamant for the need of a standing repo facility going forward. 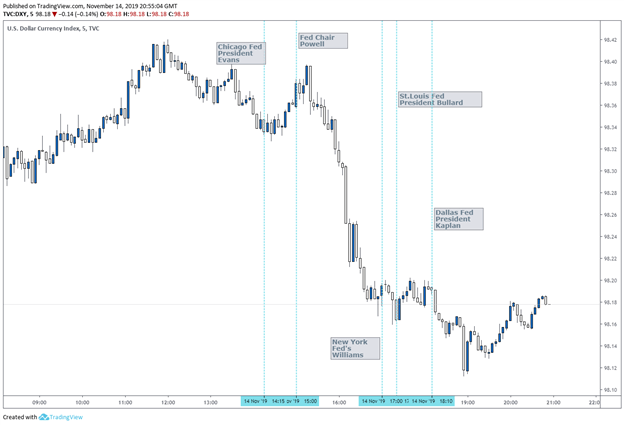 NY Fed President Williams spoke this morning, staying mostly inline with remarks made by Powell from the FOMC press conference last month. Williams reiterated that the economy is in a good place and the outlook remains largely data dependent. Furthermore, Williams stated that trade uncertainties could persist even if a deal between the US and China is reached. 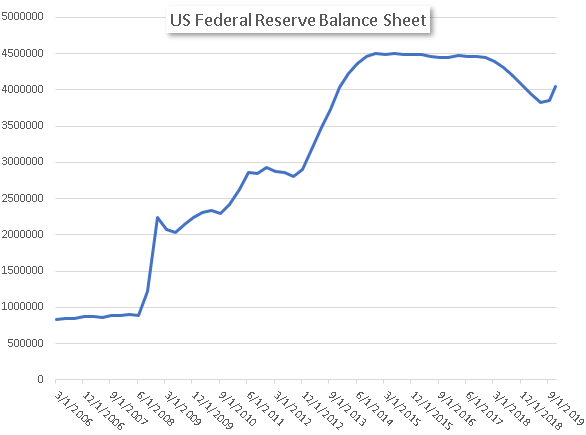 Chicago Fed President Evans spoke early this morning but did not comment on monetary policy or the economy. However, he did note that it is critical for an assessment to be done on Facebook’s digital currency Libra and its potential impacts it may harbor. To reinforce the concern Evans said that Facebook’s recent missteps on security and privacy have raised questions on the implications of the cryptocurrency.

Speaking at the Rotary Club of Louisville, James Bullard said that the positive slope on the yield curve is bullish for next year and this year three rate cuts could put inflation back in target for the fed. A known dove, Bullard continued to harp on a wait and see approach for after this year’s cuts. 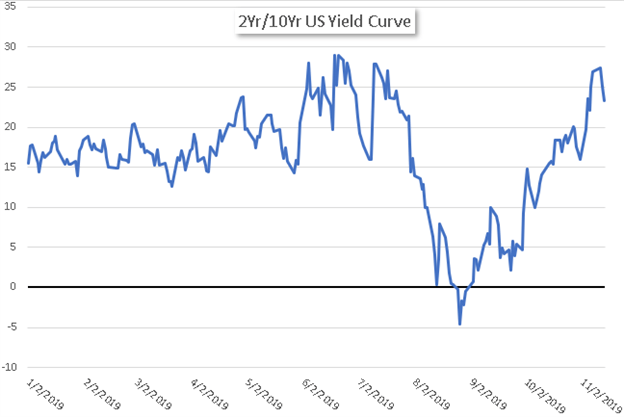 Dallas Fed President Kaplan stayed in step with most of his counterparts speaking today. Kaplan stated that the economy remains in good shape with a strong labor market that is “very tight.” Going on, Kaplan said he believes the US has a good shot at achieving 2 percent GDP growth for 2020. Furthermore, Kaplan echoes his colleagues saying that strain is being created from the issuance of government debt and went on to say, debt should be moderated during these good times.

Federal Funds Futures are pricing a 7.7% probability for a rate cut at next month’s FOMC meeting, down from 57.7% on October 3rd. 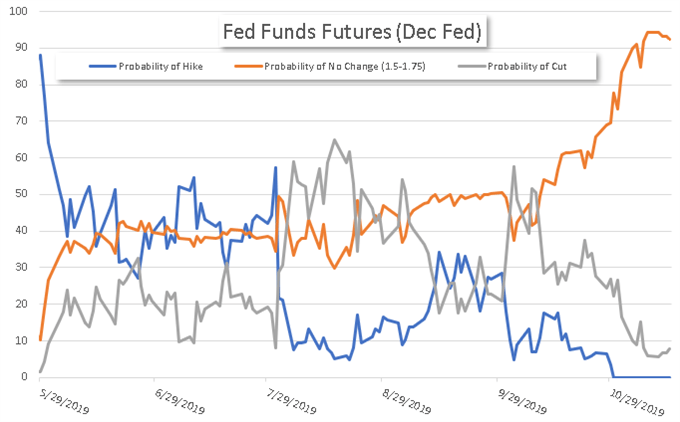 DailyFX forecasts on a variety of currencies such as the US Dollar or the Euro are available from the DailyFX Trading Guides page. If you’re looking to improve your trading approach, check out Traits of Successful Traders. And if you’re looking for an introductory primer to the Forex market, check out our New to FX Guide.

Mike Bloomberg said he’ll release ex-employees from NDAs. Here’s why you should think twice before signing one

Are there too many central bankers?