Learn how to use political-risk analysis in your trading strategy!

The US Dollar, Japanese Yen and Swiss Franc may rise in the upcoming session as result of a premium being placed on anti-risk assets in an environment of market-wide uncertainty. Crude oil prices surged over 18 percent early into Monday’s trading session after news broke over the weekend that Saudi Arabia’s Aramco oil processing facility was hit by drone strikes over the weekend.

US officials have blamed Iran for ordering the attack via a proxy in Yemen. This comes as the EU is attempting to negotiate with officials in Tehran to not abandon the 2015 nuclear agreement after the US recently shredded the deal and reimposed sanctions. European officials have attempted to incentivize Iran to adhere to the stipulated guidelines through employing a non-US Dollar denominated trade mechanism known as INSTEX.

The Special Purpose Vehicle (SPV) was created with the intention of stoking economic activity in Iran to counter the growth-impeding affect of US sanctions. However, it appears these efforts have not only been in vain but have caused a further deterioration in US-EU diplomatic relations. Iran’s alleged involvement the attack against Saudi Arabia makes Brussels-Tehran negotiations that much more difficult.

Learn how to strategize around political risk here!

Chart of the Day: S&P 500 Futures Gap Lower on Saudi Aramco Attack – Will it Echo into European Equity Markets? 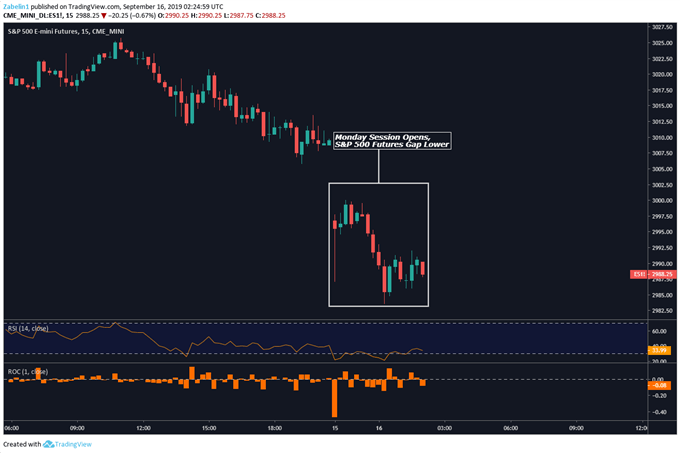 Big Story | What does a normal monsoon mean for India?

GMR Group cuts employees#39; salary by up to 50% due to COVID impact

Key Words: U.S. government is making ‘the most fundamental error we could make at this moment,’ warns Republican economist

Banks left with no choice but to park money with RBI: SBI Chairman Rajnish Kumar