Strait of Hormuz: The World’s Most Important Oil Chokepoint

01:06 2019
Print This Article
👤by Currencies
Filed under
Currencies

The Strait of Hormuz and Oil Analysis – Talking Points:

What is the Strait of Hormuz?

The Strait of Hormuz lies between Oman and Iran and is considered the world’s most important chokepoint. It is 21 miles wide at its narrowest point, while the shipping lanes in each direction are just two miles wide. 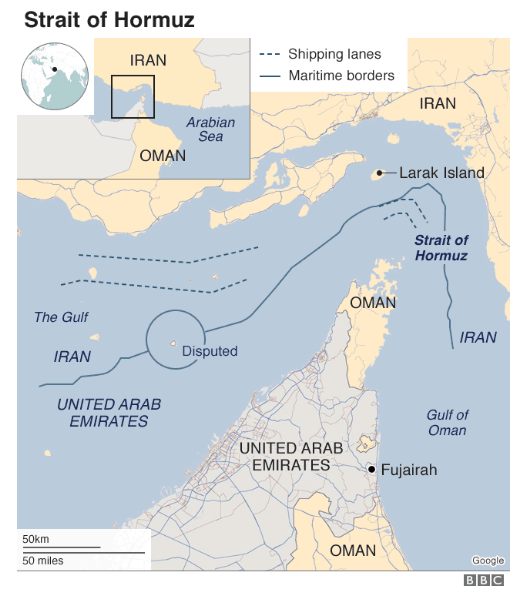 Why is the Strait of Hormuz Important?

Over a third of global seaborne crude oil exports pass through the Strait of Hormuz with roughly 21 million barrels per day (mbpd) of crude, condensate and refined products from OPEC’s top five producers (Saudi Arabia, UAE, Kuwait, Iraq and Iran). The majority of the oil that flows through the Strait heads towards Asia, while Western nations also heavily rely on the supplies from the Strait.

Typically, disruptions in the Strait can have a notable impact on trader sentiment in the oil complex. As a reminder, oil prices jumped over 4% in June 2019 when two attacks on tankers were witnessed in the Gulf of Oman.

History of Conflict in the Strait of Hormuz

Can Iran Close the Strait of Hormuz?

In theory, Iran could restrict traffic that enters the narrow passage. In December 1982, the UN Convention on the Law of the Sea had been signed, which defines territorial waters to a maximum of 12 nautical miles beyond each country’s coastline. In the Strait of Hormuz, vessels are forced to use the North and East routes in order to gain access to the Persian Gulf, which means they will be passing through Iranian waters.

However, disrupting shipments in the Strait of Hormuz would likely harm their own economy as Iran is heavily dependent on the right of free passage through the Strait. As a result, oil exports would be impacted, leaving the country to rely on its dwindling currency reserves Alongside this, Iran would be disrupting the exports of its neighbours, which in turn may further isolate the country.

That said, while Iran has threatened to close the Strait of Hormuz, actions towards closing the Strait would not only be seen as desperation but also not entirely feasible, given that it would damage its own economy. However, a closure of the Strait would push two global economic powerhouses – the US and Iran – towards outright war which would likely prompt a sizeable spike in oil prices.

Indian rupee settles 3 paise down at 75.04 against US dollar