Preview for December NFP and Price Action Outlook for USD

19:07 2018
Print This Article
👤by Currencies
Filed under
Uncategorized

– Ahead of the US jobs report, rates markets (per Fed funds futures) are pricing in a 73% chance of a Fed rate hike in December.

– Expectations for the headline NFP figure have turned higher after the ADP Employment report showed that the US economy added +250K jobs last month.

The US Dollar (via DXY Index) is continuing to claw back its weekly losses, with the DXY Index almost back to unchanged on the week ahead of the December US Nonfarm Payrolls report this morning.

Price action has been decidedly bearish for the DXY Index over the past few weeks, holding below its daily 8-, 13-, and 21-EMAs; and both MACD and Stochastics remain trending lower, nestled comfortably in bearish/negative territory. For now, however, the weekly low is holding at 93.78, coincidentally the post-September FOMC meeting swing low on September 22. 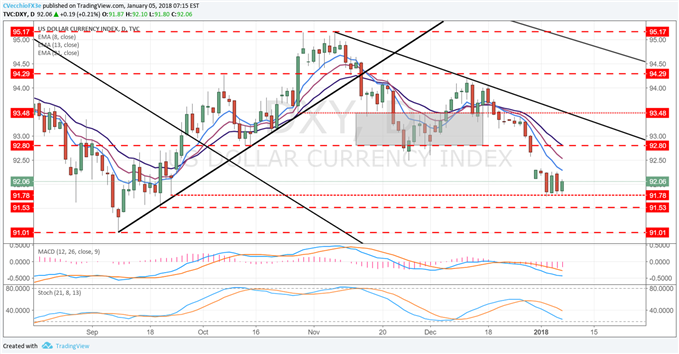 Current expectations for today’s data have improved over the last 24-hours, after better than expected ADP Employment report showing that the US economy added +250K jobs last month. Unfortunately, while the ADP report in conjunction with the ISM Services report serve as contemporaenous indicators, we don’t get the ISM Services data until 90-minutes after the December NFP is released. Accordingly, according to a Bloomberg News survey, the unemployment rate expected to hold at 4.1%, and the headline jobs figure to come in at +190K. Wage growth is due in around +2.5% y/y.

From this point of view, the US Dollar’s bearish posture could erode heading into next week, particularly if US Treasury yields continue trending higher, the US Dollar remains a favorable ‘buy the dip’ candidate against the lower yielding safe haven currencies like the Japanese Yen. 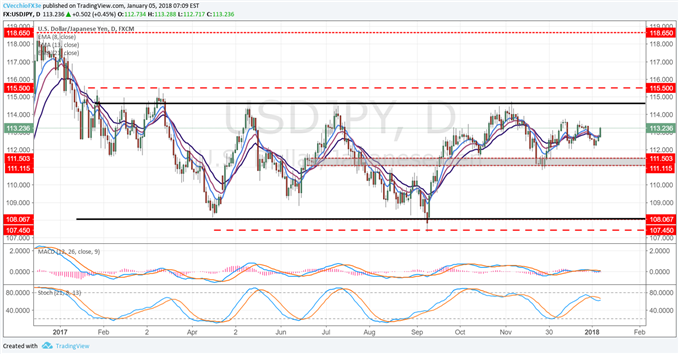 USD/JPY has been trading in a sideways range for the past 12-months, with the recent swing highs since April 2017 capped off near 114.60. The pair does however have a burgeoning bullish technical structures ahead of the US jobs data today. In USD/JPY, price is above the 8-, 13-, and 21-EMA envelope, while MACD and Stochastics are in bullish territory (above the median or neutral lines). Accordingly, we’ll be watching for a break of the December 12 high of 113.75 to signal that a swing into the 12-month range highs is due up next.

Read more: USD Rebounds, but Out of Favor at Start of 2018

Reduction in interest rates on small savings heartless, must be rolled back: Congress

EUR/GBP Price Outlook: Is There Light at the End of the Tunnel?

Ideas for Profit | This automaker will outperform when the dust settles