US Dollar Looks Vulnerable Through the End of 2017

10:06 2017
Print This Article
👤by Currencies
Filed under
Uncategorized 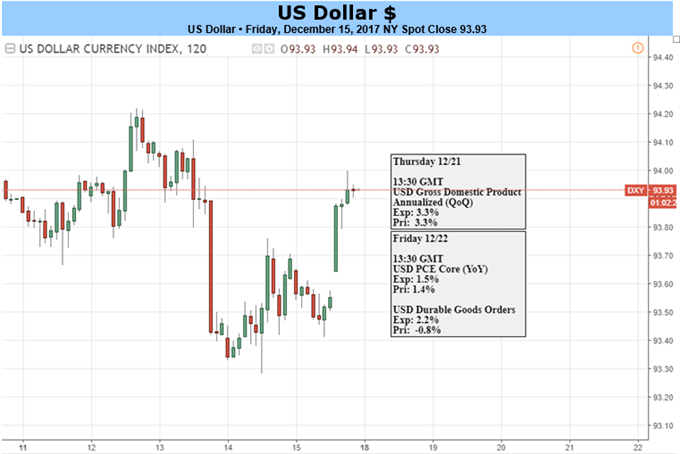 Fundamental Forecast for the US Dollar: Neutral

How can you incorporate economic news into your trading strategy? See our guide here!

Last week’s FOMC monetary policy announcement was billed as decisive for the US Dollar, and on this score, it did not disappoint. Indeed, the outing marked the currency’s most volatile day in over two months. It plunged against all of its major counterparts, tellingly tracking a drop in Treasury bond yields and a flattening of the 2018 tightening path implied in Fed Funds futures.

This textbook response to a “dovish” policy outturn is difficult to reconcile with Fed guidance seemingly steering in the opposite direction. The committee projected three rate hikes next year, topping priced-in bets. It lifted forecasts for growth and employment too. Fed Chair Yellen even stressed that officials’ rosier outlook didn’t reflect anything new on fiscal policy, signaling confidence in underlying economic strength.

A raft of explanations quickly surfaced. Some cited profit-taking, claiming the outcome was already priced in. Others pointed to the disconnect between an unchanged rate hike forecast and the GDP outlook upgrade, saying it meant the Fed is reluctant to tighten even as growth accelerates. Perhaps the most compelling theory blamed year-end flows, with passing event risk allowing traders to juice the last of the year’s top trends.

In any case, the markets weighed up the last of the year’s critical fundamental news-flow and clearly signaled their disposition, hinting that the greenback may face still more selling before the calendar turns to 2018. A revised set of third-quarter GDP statistics and November’s PCE inflation data would probably need to come in a lot better than expected to tip the scales in buyers’ favor in the week ahead.

The fiscal side of the equation remains a wildcard. Last-minute wheeling and dealing among Congressional Republicans appeared to secure enough support to pass long-promised tax cut legislation, with a vote possible as soon as Monday. The markets’ post-FOMC response suggests this has already entered into asset prices, but the Dollar may find a bit of residual support once the “ayes” are counted.

Personal Finance Daily: Black Americans are twice as likely to die from COVID-19 and is it safer to stay at an Airbnb during your summer vacation?

UP government asks Centre to allow migrants to register for housing under PM Awas Yojana: Report

EasyJet ejected from the UK's list of top companies

Big Story | What does a normal monsoon mean for India?