US Dollar at the Mercy of Senate Tax Cut Vote Outcome

13:06 2017
Print This Article
👤by Currencies
Filed under
Uncategorized

A lackluster offering on the European economic data docket seems likely to put the fate of US tax reform in the spotlight once again. November’s manufacturing ISM survey is also on tap but its impact may be dulled with a Fed rate hike all-but-fully priced in for December. Next year’s tightening path seems to be the central object of speculation, and the fiscal policy trajectory is seen as a key ingredient on that front.

Lawmakers in the US Senate are expected to begin voting on their version of a tax cut plan after last-minute fissures in the Republican-led consensus forced a postponement yesterday. Opponents of the plan are worried that it will swell the budget deficit. They have proposed delaying cuts or including an automatic trigger to reverse them if a fiscally-inspired growth pickup fails to top up the Treasury’s coffers.

The passage of a straight-forward tax bill without such gimmicks is likely to be cheered by markets. The US Dollar will probably emerge as an unambiguous winner in this scenario because the markets expect the cuts to be inflationary, forcing the Fed into a steeper rate hike cycle. If the vote fails or the final offering is blemished by delays and counter-cyclical provisions, it is likely to be met with disappointment.

The Canadian Dollar was broadly higher in Asia Pacific trade, tracking crude oil prices upward. A widely expected 9-month extension of an OPEC-led production cut scheme failed to excite the markets. No deal was struck on how cuts will be unwound once the program runs its course, which seemed to disappoint the markets (as expected) and left prices rudderless. Some belated gains seem to be emerging now however.

The New Zealand Dollar continued to suffer against its G10 counterparts. The currency has struggled to find firm footing after suffering outsized losses in the wake of disappointing business confidence data yesterday. Prices fell in tandem with local bond yields, pointing to deterioration in the RBNZ policy outlook. Yen traded broadly lower as Japanese stocks advanced, sapping demand for the standby anti-risk unit.

What is the #1 mistake that traders make, and how can you fix it? Find out here! 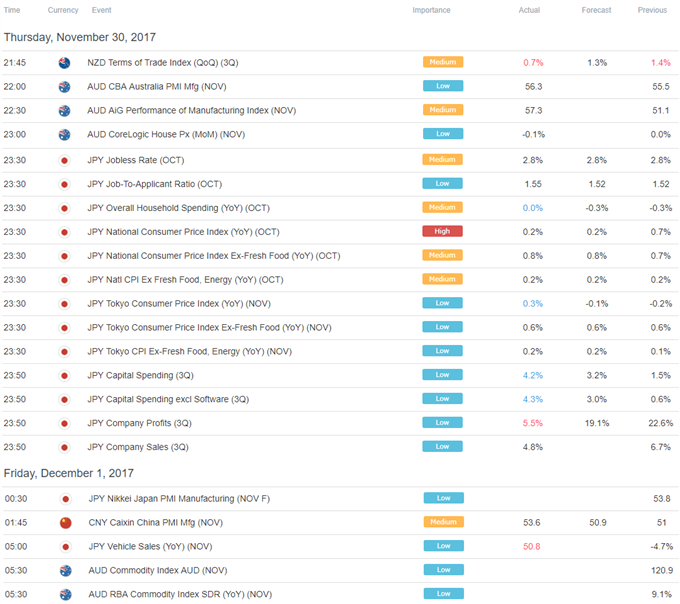 Which equity markets and other asset trading exchanges are closed on Good Friday? Easter Monday?

Should the IMF dole out more special drawing rights?