01:07 2017
Print This Article
👤by Currencies
Filed under
Uncategorized

– Markets opened with the insertion of additional political risk when coalition talks in Germany failed.

– EUR/USD was volatile after the open, but retail traders remain stretched to the short-side. Given retail traders’ traditional contrarian nature, this may be pointing to further upside for EUR/USD.

– Looking for trade ideas? Check out our trading guides. And if you’re looking for something more interactive in nature, check out our DailyFX Webinars.

It’s already been a busy start to this holiday-shortened week for FX traders. Markets opened with the news that Angela Merkel’s Christian Democrats won’t be able to cobble together the four-party coalition that was thought would run Germany after September’s elections. This adds another potential question mark around the Euro as leadership in the stalwart of the zone remains uncertain, but we’re still fairly early in the process as Mrs. Merkel as options: There’s the potential for a minority government or, perhaps even for a ‘grand coalition’ with her party’s primary opposition of the Social Democrats.

The Euro swung erratically on the open with calm prevailing soon after. The initial response was one of Euro weakness, and in EUR/USD, prices moved back-down to again test the support zone that we’ve been following that runs from 1.1685-1.1736. Buyers responded after a few hours of grind at the top-side of that zone; but when taken with recent price action on the hourly chart, it does show another lower-low after last week’s lower-high, giving the appearance that bearish continuation may be in order. 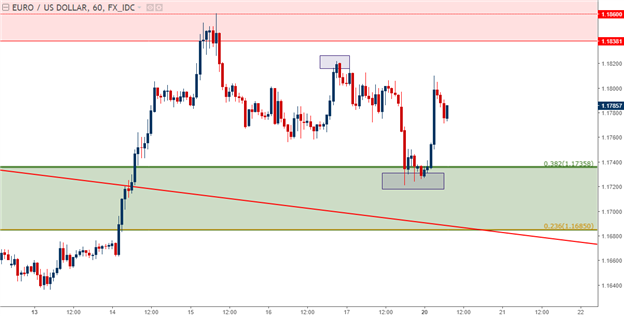 On a longer-term basis, this adds even more question to near-term direction. Even as we came into last week, the Euro remained fairly bearish on the heels of the October ECB rate decision. Markets had bid the Euro higher throughout the year under the presumption that the European Central Bank would walk away from stimulus before the end of the year, or at the very least announce some type of plan for tapering their bond buys. When this didn’t happen, and when the ECB effectively kicked the can on this whole idea, the rationale for continued Euro strength wasn’t really there anymore. And traders responded accordingly by offering the single currency lower.

But last week brought a set of red-hot German GDP numbers. Germany grew by .8% in Q3, and this drove the Euro-zone as a whole up to .6%; putting the economy on pace to out-grow the United States by a healthy margin this year. Meanwhile, the Fed has hiked rates four times in the past two years, with a very likely fifth less than a month away. The ECB hasn’t even started the process of getting ‘less loose’, much less tightening. There is some divergence here, and should this growth story continue, the ECB will likely have some catching up to do.

This is likely the driver behind why so much strength showed last week on the heels of those GDP reports. It also brought to question the prospect of bearish continuation in EUR/USD, as last Tuesday’s price action burst through a number of key resistance levels. That strength continued through the early portion of Wednesday trading until prices found a key zone of potential resistance that we’d been following that runs from 1.1838-1.1880. Once prices hit the October 19th swing high at 1.1860, bears began to take over. This produced a shooting-star formation on the Daily chart that intersected with resistance, as we wrote about last week (shown in blue on the below chart). 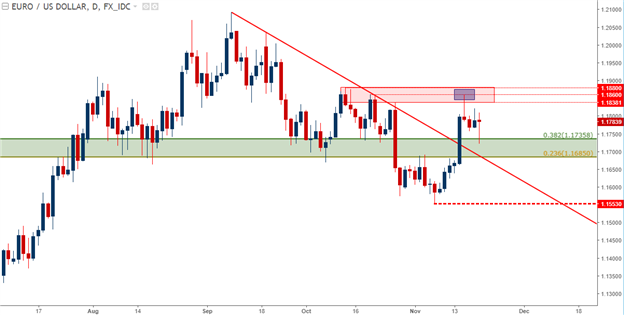 EUR/USD Continues to Carry Setups on Both Sides

While the above two charts aren’t really showing any distinct near-term directional movement or trends to work with, there are still setups on both sides of EUR/USD as we open this week. The shorter-term setup would be bullish, hypothesizing that the weakness seen since Wednesday was corrective in nature after the top-side burst earlier last week. This approach can focus-in on the zone of support that runs from 1.1685-1.1736, incorporating a bullish trend-line projected from price action earlier in the month. 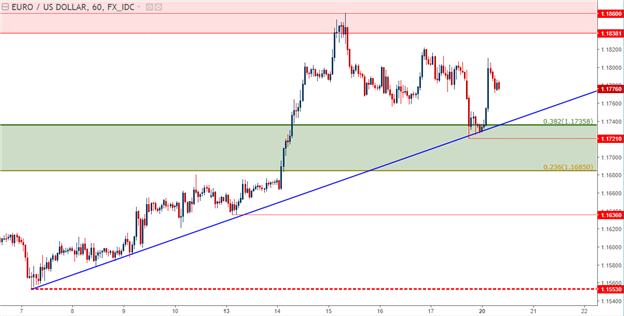 The longer-term setup would be diametrically opposed to the above bullish stance. The longer-term setup in EUR/USD would be bearish in nature, driven by the assumption that last week’s strength in the early portion of the week was a correction to the bigger picture theme of Euro-weakness. This case is strengthened by the fact that Wednesday’s resistance showed-up at the under-side of a bullish trend-line projection that’s confluent with a batch of swing-highs that showed in October. Adding in that the daily bar put in a shooting star formation, which is often approached as a bearish reversal setup, makes this scenario even more interesting. 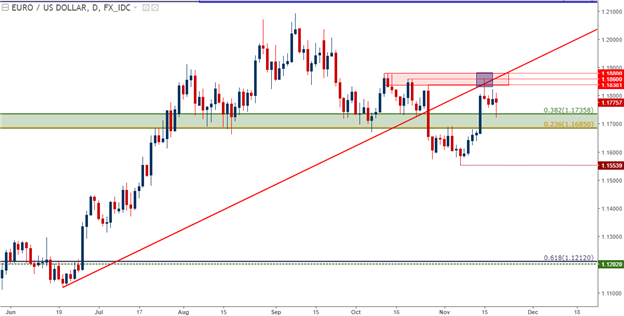 What to Do if You Don’t Know What to Do

The above two charts show two very divergent paths for near-term Euro price action, and as we shared, there is really a valid case to be made on both sides. This can even be extended to the fundamental side of the equation. For traders that don’t have a bias, or for those that don’t want to get caught when two major currencies both appear to be going through some process of transition, the best option is likely to just next the pair and find something with a better setup. Remember – in trading, you always hold your trigger, and you don’t have to execute anything you don’t want exposure in.

For traders that do want to gain exposure to long-USD themes under the presumption that this year’s sell-off in the U.S. Dollar is going to see some additional give-back as we head towards year-end, the short-side of AUD/USD can remain as attractive. We sent out an Analyst Pick on the pair a few days ahead of the October ECB meeting on AUD/USD and that position now has one target remaining; we added to the position two weeks ago and that lot has hit the first target and has two remaining.

Traders looking to add short-side exposure in AUD/USD will likely want to wait for some element of resistance to show. Support, it would appear, is coming in just ahead of the vaulted psychological level of .7500, so likely traders will want to incorporate that as an initial target of some sort on short-side plays. Potential resistance exists at .7625 and .7700, and there is a potential area for short-term resistance around .7583. 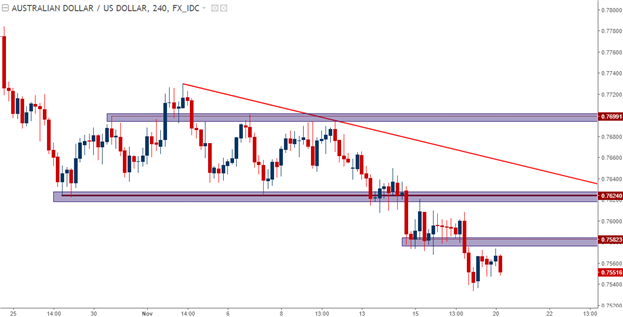 On the other side, for those that want long exposure into the Euro, but do not want to wrestle with a U.S. Dollar that may be on the cusp of its own bullish run as we head towards a December rate hike from the Fed – a pair like EUR/JPY could be helpful. This would allow traders to focus-in on the prospect of continued Euro strength without having to load-up against USD.

While EUR/USD began to shake with violence around the ECB’s stimulus extension in October, EUR/JPY largely held support despite a slight amount of slippage as a key zone that had held the lows for two months started to see bears tip-toe lower. But that was largely contained as last week’s bullish breakout on the heels of those GDP reports sent prices right back towards resistance.

Another probe into support after this week’s open, on the heels of that news around German elections, saw buyers respond fairly quickly. Today’s daily bar is still very young, and a ways from closing – but if we do see price action finish today with an element of indecision, whether that be with a long-legged doji or a spinning top, the door can be opened for bullish plays in EUR/JPY, looking to play the near-term range in the direction of the longer-term trend. 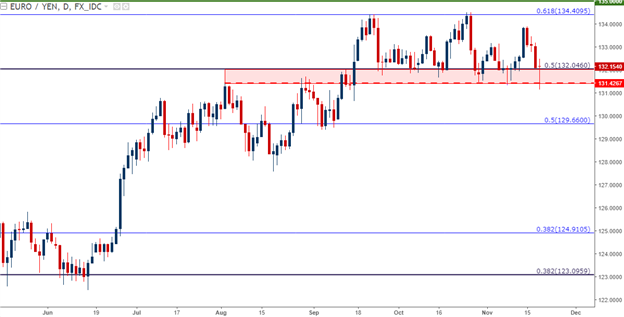 Taking Stock: No Monday blues! Sensex up more than 400 points, Nifty flirts with 10,800

Warren Buffett finally opens his wallet during the pandemic, with nearly $10 billion purchase