10:06 2017
Print This Article
👤by Currencies
Filed under
Uncategorized

The Euro underperformed in Asia Pacific trade following news that German coalition negotiations had broken down. The pro-business FDP party abandoned the talks, which would have produced a four-party ruling bloc led by Chancellor Angela Merkel. The anti-risk Yen and Swiss Franc rose as worries about political instability in the Eurozone’s largest economy weighed on market sentiment.

The New Zealand Dollar corrected cautiously higher having been battered amid risk aversion Friday after Special Counsel Robert Mueller subpoenaed the Trump campaign. The US Dollar also managed a tepid recovery after suffering the second consecutive week of losses amid ebbing confidence in the successful implementation oftax cuts that markets hoped would boost inflation and encourage Fed rate hikes.

Looking ahead, a pair of speeches from ECB President Mario Draghi headline an otherwise lackluster European economic calendar. With the near-term policy path already decided and likely to remain untouched at least through early 2018, markets will be most interested in what might happen if the economy deviates from baseline assumptions.

Risk trends might continue to hold sway however. FTSE 100 and S&P 500 futures are pointing decidedly lower before London and New York come online, hinting that the sour mood prevailing overnight is aiming to extend through the rest of the global trading day. On balance, that seems likely to continue pushing funding currencies like the Yen and Franc higher against their G10 counterparts.

What is the #1 mistake that traders make, and how can you fix it? Find out here! 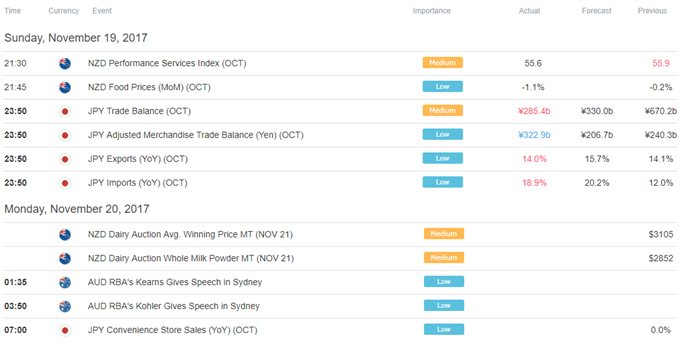 USD/MXN Price Forecast: A Risk of a Possible Reversal- USD vs Mexican Peso

In midst of a storm: 270 stocks in BSE 500 with high FII exposure face selling pressure

Focus on largecaps, FII could remain net sellers in April too: Kotak Securities