08:33 2017
Print This Article
👤by Currencies
Filed under
Currencies

Find out in our Q4 Forecasts what is expected to drive the FX market through year-end.

In the following table, you’ll find implied volatility (IV) levels for major USD-pairs looking out over the next one-week and one-month time-frames. We’ve noted the differential between the two, which can help shape expectations and/or identify currency pairs where the options market may be under or over-pricing potential price movement in the short-term. Also outlined, are derived range-low/high prices from the current spot price within one-standard deviation for the one-week time-frame. (Statistically speaking, there is a 68% probability that price will remain within the lower and upper-bounds.)

Implied volatility low across the board with NZDUSD & GBPUSD at the top of the board for expected price movement.

For the past month or so FX volatility has been on the decline, with most major USD-pairs exhibiting double-digit one-week implied volatilities in early to mid-September, while now all of them are sporting single-digit percentages. This will of course change, but for now let’s look at the two pairs with the highest expectations for price movement at this time. NZDUSD and GBPUSD are at the top of the list, closely followed by USDJPY. Coming in at the bottom and with significantly lower levels of implied volatility are EURUSD and USDCHF, but this will likely change very soon as the market starts pricing in next week’s ECB meeting.

NZDUSD one-week implied volatility peaked in mid-September at over 14.6% when it was at its highest levels since November. Since then it has declined to 9.21%. The projected one-standard deviation range from the current spot price is 7042-7224. Of particular interest is the alignment of the projected low and support in the vicinity of 7040/60. For kiwi to stop the series of lower highs and lower lows since July from progressing it will need to hold onto the recent low and that support zone. A breakdown below and the recently declining levels of volatility could quickly begin to ratchet back up again. 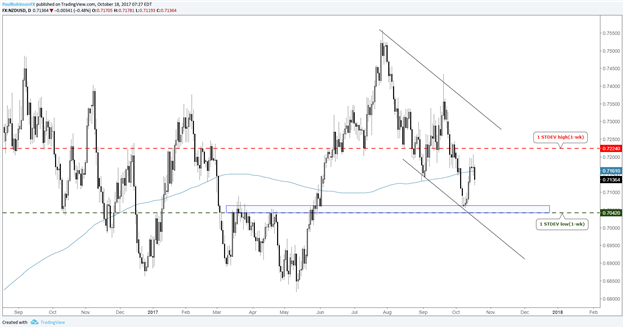 GBPUSD one-week wasn’t ramped as high as kiwi but is still off of its September peak off 11.59%, now down to 9%. This, however, has been on the climb since earlier in the month where it troughed at 7.2%. So, while volatility expectations have diminished over the intermediate-term, they have risen recently. The projected one-week range is 13020-13348. Looking at the chart the low-end projection is of interest as it aligns with confluence between the April lower parallel, March trend-line, and 10/6 low. Should we see trade down to that area it will be important for cable to hold or else we could see a broader move towards the August low develop, in which case volatility would likely continue its recent trend back higher. On the top-side the projected high is just beyond the recent swing-high at 13337, where there was a small bounce back on 9/28.

Heads up: In tomorrow’s “Becoming a Better Trader” webinar I will discuss how to handle low volatility and the frustration which can often stem from this type of trading environment; for details please see the Webinar Calendar. 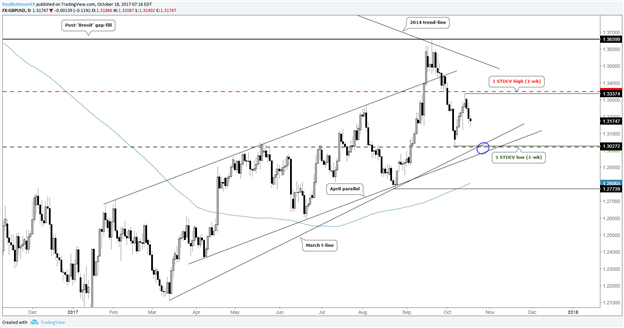 For other currency volatility-related articles please visit the Binaries page.

Gainers Losers: 10 stocks that moved the most on July 10