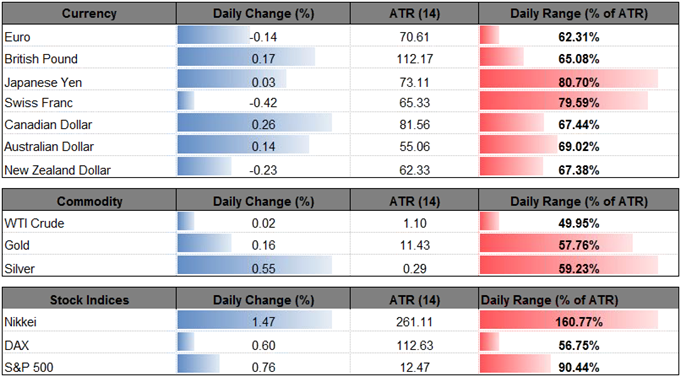 GBP/USD outperforms against most of its major counterparts despite the slew of mixed data prints coming out of the U.K. economy, and the British Pound may exhibit a more bullish behavior ahead of Bank of England’s (BoE) December 14 meeting as the central bank looks to further normalize monetary policy in 2018.

Keep in mind, the Monetary Policy Committee (MPC) appears to be in no rush to implement higher borrowing-costs following the dovish rate-hike in November, but Governor Mark Carney & Co. may gradually move away from the highly accommodative stance as Deputy Governor Ben Broadbentwarns against the ‘strain of opinion that EU withdrawal is something that necessarily means lower interest rates.’ As a result, BoE may follow a similar approach to its U.S. counterparts and start the normalization cycle with one rate-hike per year as ‘a majority of MPC members had judged that, if the economy continued to follow a path broadly consistent with the prospect of a continued erosion of slack and a gradual rise in underlying inflationary pressure, some withdrawal of monetary stimulus was likely to be appropriate over the coming months in order to return inflation sustainably to target.’

With that said, the broader outlook for GBP/USD remains constructive as it preserves the upward trend from earlier this year, with the pair at risk of threatening the range-bound conditions from earlier this month amid the failed attempts to test the November-low (1.3040). 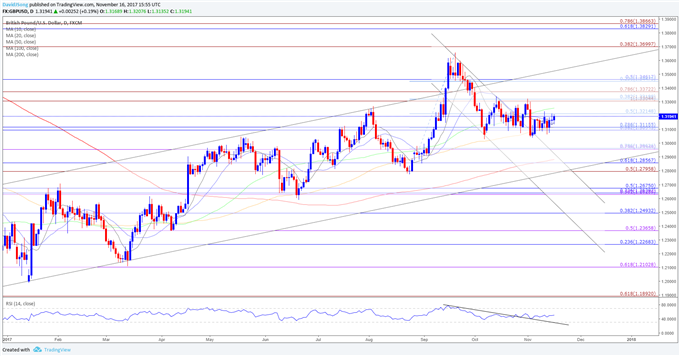 Downside targets are back on the radar for USD/JPY as it snaps the monthly opening range, and the pair may continue to retrace the rebound from the 2017-low (107.32) as it extends the series of lower-highs from earlier this week.

Lackluster data prints coming out of the U.S. economy appears to be weighing on the dollar-yen exchange rate as the Federal Reserve struggles to combat the low-inflation environment, and the pair may continue to track the broad range from earlier this year amid the mixed language coming out of the central bank.

Recent comments from Boston Fed President Eric Rosengren suggest the Federal Open Market Committee (FOMC) will further normalize monetary policy over the coming months as he sees a need to ‘gradually remove monetary policy accommodation, which is quite consistent with market expectations of another increase in December.’ Moreover, the 2019 voting-member noted that ‘globalization and technology changes do not seem as compelling an explanation for recent inflation misses as temporary idiosyncratic factors,’ and it seems as though the central bank will continue to look through the near-term weakness in price growth with current Governor Jerome Powell on course to take the helm in 2018.

However, with ‘inflation on a 12-month basis is expected to remain somewhat below 2 percent in the near term,’ USD/JPY may ultimately face a more bearish fate should a growing number of Fed officials trim the longer-run forecast for the benchmark interest rate. 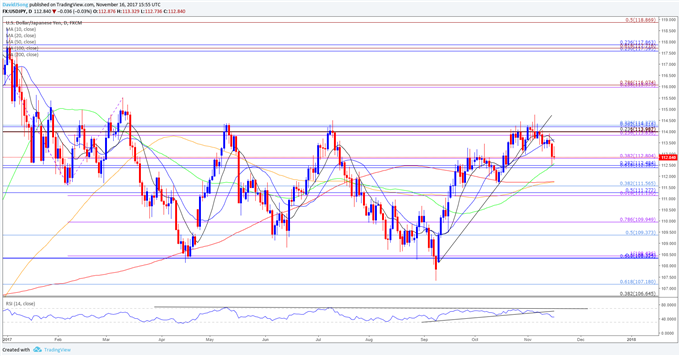 New to the currency market? Want a better understanding of the different approaches for trading? Start by downloading and reviewing the FREE DailyFX Beginners guides!

Direction of gold in short-term will depend on US bond yields, USD, ETF flows trend: Ravindra Rao

When will I get my extra $300 a week in unemployment benefits? Why isn’t everyone out of work eligible under Trump’s proposal?