DXY Index Slammed Down to Key Support Ahead of US CPI, Retail Sales

00:44 2017
Print This Article
👤by Currencies
Filed under
Uncategorized

– DXY Index crashes into lows of October ECB meeting near 93.44.

– With Fed funds pricing in a 100% chance of a hike in December, progress of tax reform legislation remains the key driver for the US Dollar.

– Retail trader sentiment had previously shifted to a neutral USD outlook, suggesting that a turn may be coming.

The US Dollar took a major step back yesterday, crashing out of its three-week range and two-month uptrend. With 94.19 lost as support, attention has quickly shifted to the October 26 bullish outside engulfing bar low, formed the day of the October ECB meeting, at 93.44. Momentum has started to swing lower as well, with the DXY Index trading below its daily 8-, 13-, and 21-EMAs, and MACD and Stochastics trending lower (albeit in bullish territory still). 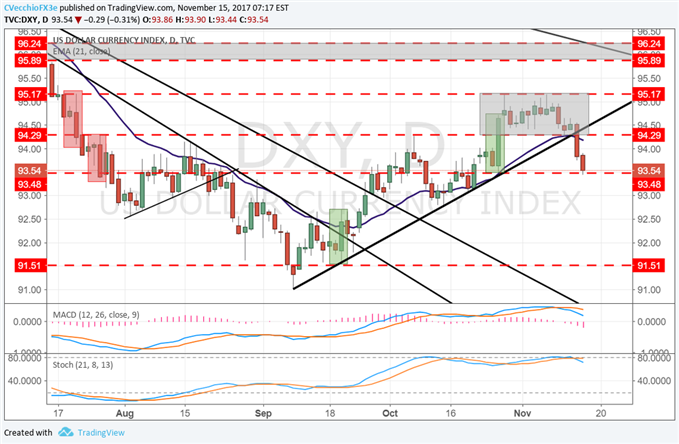 The US Dollar’s weakness today may also be attributed to positioning ahead of key data today. Consumption is the most important part of the US economy, generating nearly 70% of the headline GDP figure. The best monthly insight we have into consumption trends in the US might arguably be the Advance Retail Sales report. In October, according to a Bloomberg News survey, consumption was flat the headline Advance Retail Sales due unchanged from the previous month. The Retail Sales Control Group, the input used to calculate GDP, is due in at +0.3% from +0.4% (m/m).

These figures aggregately have started to steady near the Fed’s medium-term target, further confirming that the Fed will raise rates in December (Fed funds are pricing in a 100% chance of a 25-bps rate hike). However, moving forward, if headline inflation slips below +2%, the pace of future rate hikes may be questioned in a manner negative for the US Dollar.

Rupee opens lower at 75.61 per dollar

Dependables: PMSes allocate more than 5% of portfolio to these 50 large midcaps